A pedal bike parked at Bournemouth University was taken by an unknown man after he cut the lock but quick thinking police officers gave chase as he tried to ride away. 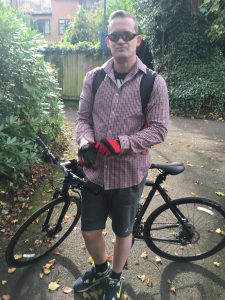 Adam Wright and his bike

The man had used a hacksaw to get the bike free from the University car park bike stand and attempted to flee when two passing police noticed his suspicious behaviour, he was cornered on Gillet Road and arrested for theft.

When they traced the bike for a registration from the Bike Registration Scheme, they were able to find the owner and return it to them. The thief was charged and later appeared at Poole Magistrates’ Court on Wednesday 15 December where he was sentenced with a 12-month community service order and was required to attend rehabilitation for drugs and crime, alongside paying £95 to the bike owner.

“I could not be more grateful to Dorset Police and the officers involved with the recovery of my stolen bike from my place of work.”