Chief Constable Chilton began his role this week following the retirement of former Chief Constable James Vaughan and claims that he wants to improve community safety and deterrence against crime by making taking a harsher approach to criminals, saying “I want to make Dorset as hostile a place as possible for any offender or criminal so our communities are safe and feel safe”. 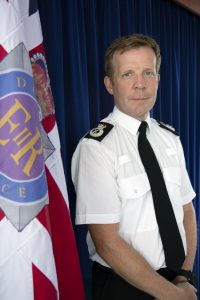 Before becoming the Chief Constable, Scott Chilton has worked across special branch, counter terrorism, police operations and public contact and strategic partnerships for Hampshire Police. He then rose to the rank of Assistant Chief Constable for Hampshire covering crime, criminal justice and intelligence before joining Dorset Police last year.

With the Chief Constable’s previous experience in the force, the local police will likely take a stricter response to criminal activity and aim to reduce the crime rates even further. Chief Constable Chilton said “Dorset remains an area of low crime, which continues to fall, but I want to ensure we are targeting those who wish to cause harm in our communities, while working with partners to solve problems and enhance the life of our residents as a result”.

The Police and Crime Commissioner (PCC), David Sidwick, recently announced similar claims upon his election and this seems to support the aims of the new Chief Constable who added “We have a recently elected Police and Crime Commissioner in David Sidwick and he will soon be publishing his police and crime plan” and “This will drive our own priorities going forward, which will focus on collaboration and working closely with our partners and communities”. This shows a focus in changing how the police force acts and responds to crime in the local area by working alongside the PCC and his upcoming Police and Crime Plan.