Work on Whitelegg Way is coming to an end after six months of changes being made as part of the Transforming Travel programmes across BCP.

The Transforming Travel programmes are making changes across BCP to improve the infrastructure of the roads and give more opportunities for greener, eco-friendly travel such as cycling or walking. Whitelegg Way has gone through many changes as part of this programme, having new dedicated cycle paths installed on both sides and reducing the speed limit from 40mph to 30mph so it becomes safer for both the drivers and more cyclists. 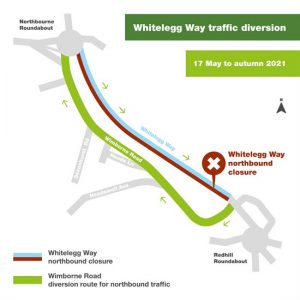 Image showing the area that has been worked on over the past 6 months.

Work on the road began on 17 May and has now officially ended with the road just needing to be cleared up to allow traffic before it is fully opened again. It will be closed between 9.30am-4pm and 7pm-midnight on Thursday 25 and Friday 26 November to be resurfaced after all the work.

The road will be officially reopened on Monday 29 November for two-way traffic as the work focus shifts over to the east side of Wimborne Road near the Redhill Roundabout for Phase 2 of the programme.