Police are looking for a man after an assault in Bournemouth has left a woman with a fractured arm.

On Wednesday 4 August between 5:15pm and 7:30pm, a local woman in her 20s was at the beer garden of The Grove tavern on Southbourne Grove when the man she was with had a confrontation with another group. 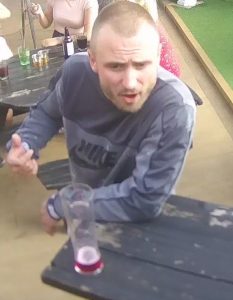 The confrontation left the victim with a fractured arm after she was reportedly pushed to the ground by one of the men in the group. Police have released an image of a man they would like to speak to regarding this incident and are making enquiries.

Anybody who recognises or knows the whereabouts of this man is asked to contact contact Dorset Police at www.dorset.police.uk, via email 101@dorset.pnn.police.uk or by calling 101, quoting occurrence number 55210125992. If you would rather stay anonymous then you can contact Crimestoppers at Crimestoppers-uk.org or call 0800 555 111.