Despite the government relaxing COVID restrictions and life beginning to return to normal for many, the BCP area is still seeing a higher than average amount of COVID-19 cases over the past few weeks, with the local reported cases almost double the national average.

BCP saw a huge increase in coronavirus cases a week ago when the Government released case figures showing the area with almost double the national average. Despite the rates slowly decreasing and the amount of confirmed cases stabilising, BCP continues to remain high on the list of areas suffering from the virus outbreak. 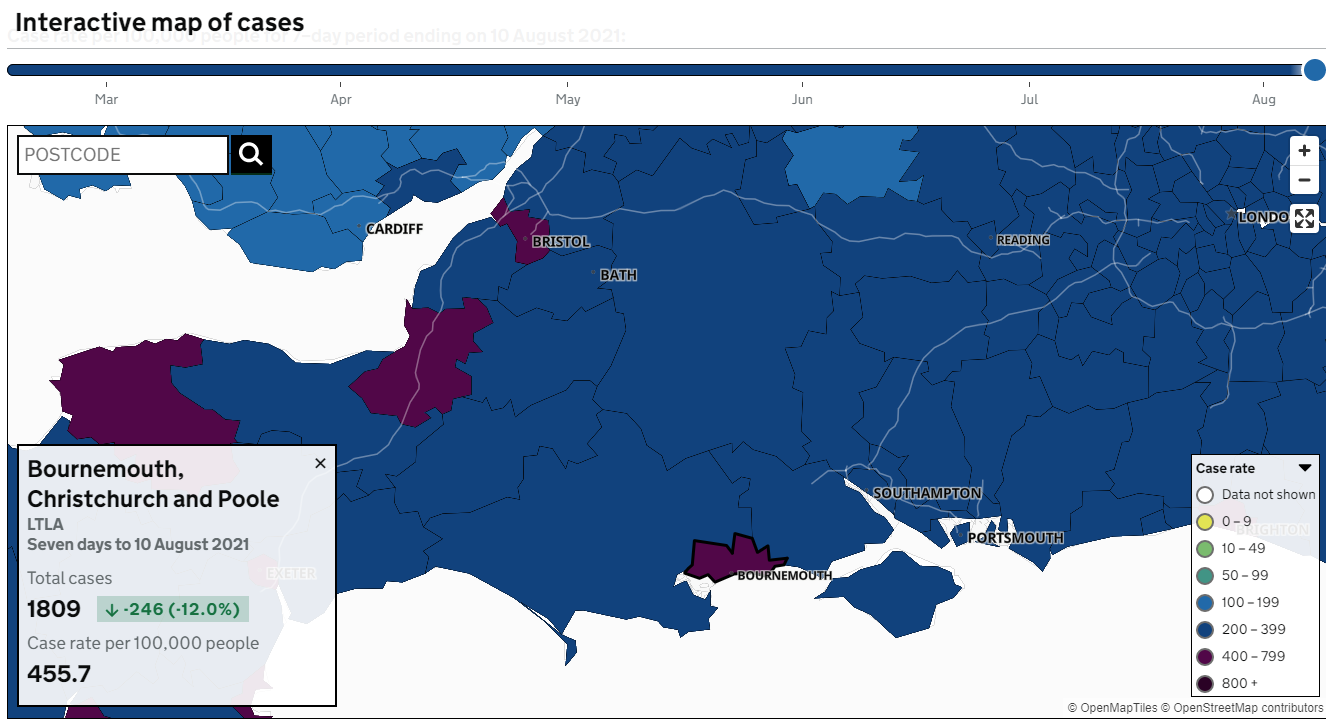 COVID cases had spiked with BCP Council reporting 2,025 individual cases in the local area on 6 August, however since then the number of confirmed cases has marginally decreased to 1,915 as of 13 August. Current reports show 482.4 cases per 100,000 people in the last week compared to the report from 6 August showing 510.1, this shows that COVID rates are still very high across the area despite the decrease. More information on the COVID statistics in BCP can be found here.

Cases in Dorset as a whole on the increase 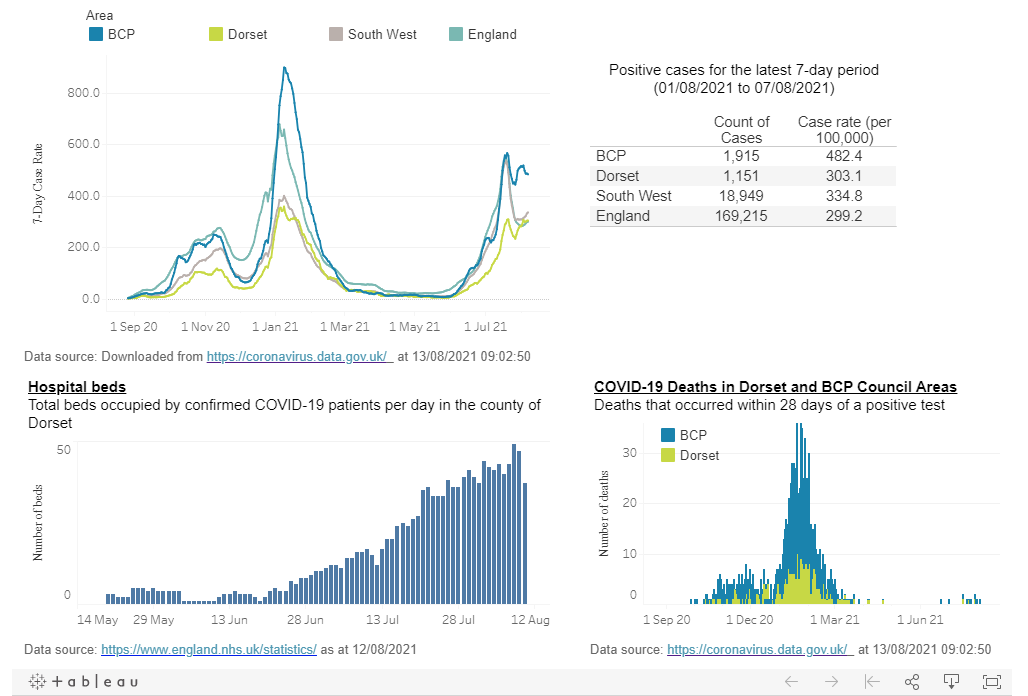 Graphs from publichealthdorset.org.uk showing the change in COVID cases.

While BCP had a sudden surge of cases followed by a slow decrease, Dorset as a whole has been steadily rising in cases over the past couple weeks with 1,071 confirmed cases on 6 August and rising to 1,151 as of 13 August. These reports show that the surge of increased cases were, compared to the rest of Dorset, an isolated issue concentrated around the conurbation and areas used as social hotspots; likely receiving more attention and activity with the lifted lockdown restrictions.

This rise in cases follows a report from the Office of National Statistics detailing how the overall hesitance towards getting vaccinated has begun to fall across Great Britain. The report, published on 9 August claims that during the early months of 2021, adults across Britain were less likely to receive the vaccine compared to recent months which has shown a steady increase in vaccination appointments. The effectiveness of the vaccine towards preventing the virus and lack of serious side effects has seemingly reassured many who were initially hesitant to trust the new initiative, the report even states that the biggest change was among those who had self-reported themselves in bad health and were now willing to get the vaccine.

A rise in COVID cases following a fall in vaccine hesitancy may seem strange but this is because of the statistics in the reports. While there is a connection between case and vaccination rates, the age groups involved are mostly different. The report about vaccine hesitancy decreasing was mainly regarding those over 30, since the data is compared to 2020 when the vaccine was only available to the older ages and those in priority before slowly making its way down the age groups.

Many young people still to be vaccinated

Increased COVID cases in the BCP area have been found mostly in younger people as many have not yet been fully vaccinated against the virus and are out enjoying the freedom after the restrictions were lifted and social hotspots allowed to reopen. While some may still be opposed to the vaccine, it’s likely that the main reason for hesitancy among some young people is prioritising social interaction and personal lives/work commitments over booking a vaccination appointment.

The case statistics also explain why BCP is almost double the national average in COVID cases; the amount of young people who live or come to the area due to it’s tourist attractions, social nightlife and university means there are lots of young, possibly unvaccinated people in a small concentrated area. This results in cases multiplying quickly and takes BCP to now being one of the highest in terms of COVID cases per area; this website even lists Bournemouth as the third highest town in their COVID leaderboard. 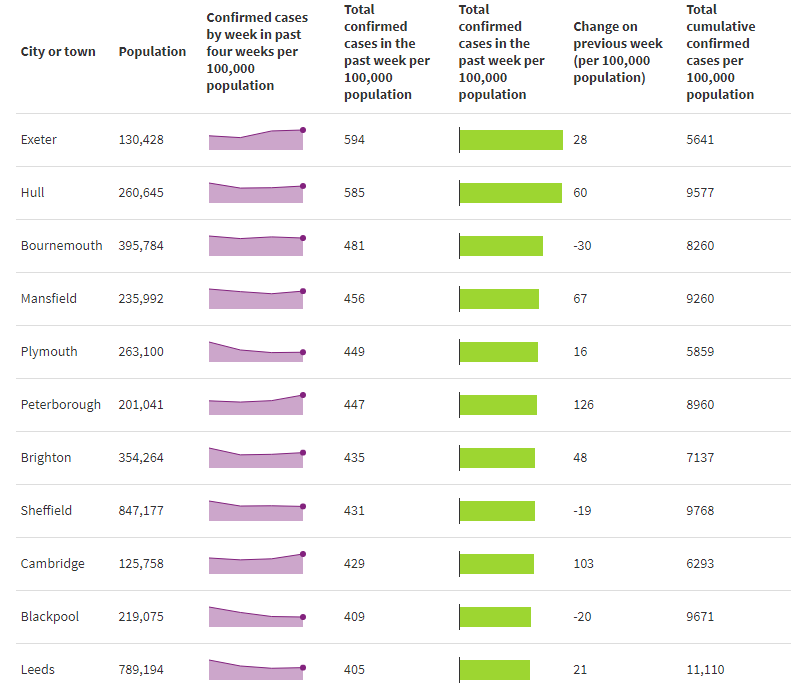