A burglary in Bournemouth has Dorset Police releasing CCTV footage of a man they would like to speak to as part of the investigation.

A property on Malmesbury Park Road was broken into and robbed of numerous bank cards between the time of 11pm on Saturday 5 June and 5.45am on Sunday 6 June.

Police arrested 2 men while following up on inquiries and continuing their investigations, a 22-year old man from Bournemouth who was taken in under suspicion of burglary and a local 26-year old man who attended a voluntary police interview, both of who have been released. 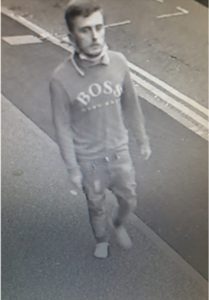 The investigation is still ongoing and the police are looking to speak with the man featured in the picture as part of their inquiries, they urge anybody with information as to the man’s identity and location to get in contact.

Anyone with information is asked to contact Dorset Police at www.dorset.police.uk, via email 101@dorset.pnn.police.uk or by calling 101, quoting occurrence number 55210089511. Alternatively, to stay 100 per cent anonymous, contact the independent charity Crimestoppers online at Crimestoppers-uk.org or call Freephone 0800 555 111.