The theft of catalytic converters from vehicles has increased in Dorset over the past few months in comparison with reported cases from last year.

Dorset Police have issued warnings to the public about a sharp increase in catalytic converter thefts across Dorset, these converters are necessary and any vehicle missing one is not legal to be driven on the road. If somebody finds their vehicle stripped of it’s converter then they cannot use it to travel and this could have a serious impact on their lives as they can no longer use it to travel to work, make a school run or even attend medical appointments, 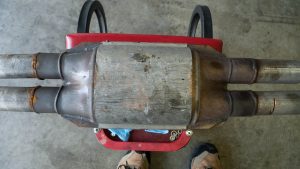 Example of a catalytic convertor.

Areas affected the most by these thefts are across the conurbation of BCP, however hotspots of convertor thefts have developed in the west and north areas of the county, proving that this is not a confined issue. Reported cases had doubled in May compared to earlier in March, this coincides with the statistics showing that cases of convertor thefts had increased 368% since this time last year, going from 94 reports in 2020 to 440 reports as of July 2021.

The catalytic convertors on vehicles contain precious metals such as platinum, palladium and rhodium which has increased in value by a large amount over the past few years and are currently worth more than gold. This has resulted in the increase of  theft cases as the thieves will take the convertors from under the cars while they are parked in the open and proceed to sell them to scrap metal merchants. Many of these transactions are done online to avoid suspicion, even through sites such as Facebook Marketplace and closed groups despite attempts from both Facebook and the police to remove this issue.

The cars that have been singled out the most by thieves are:

One of the believed reasons for the rise of converter thefts is just how quickly thieves can steal one from a car in broad daylight. Watch this video to see a catalytic converter get stolen in no more that 2 minutes. https://www.youtube.com/watch?v=KCyYgnEBDMo

To combat this surge of crime the police have issued advice on how to manage the safety of your vehicle which includes tips on how and where to park your cars in order to make access to the convertor more difficult, installing CCTV in driveways or even a driveway alarm to alert you of intruders on the property, getting a Secured by Design approved marking on our converter so it can be recognised as yours if recovered by police and even getting a ‘cage clamp’ which will make your convertor much more secure. More details of the police issued advice can be found from their website here.

If you would like to report a stolen catalytic converter then you can contact the Dorset Police online at https://www.dorset.police.uk/do-it-online/ or  you can contact Crimestoppers at 0800 555 111.