Police have released CCTV footage of a woman they would like to speak to in relation to a distraction theft that took place in Boscombe on 3 September 2020.

The incident occurred at around 11am outside the entrance to the Sovereign Centre in Palmerston Road. As she reached a walkway known as Penny Lane, the victim – a wheelchair user in her 60s – was approached by a woman who was leaving the shopping centre. 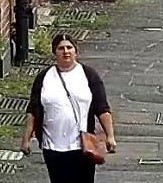 The suspect first attempted to sell her a bracelet. Then, changing her mind, said it was a gift. She wrapped it over the top of the victim’s wrist, where she was already wearing a bracelet, before asking for £2 for the now gift-wrapped new bracelet. The victim gave the woman £5 and after the transaction, the suspect walked away in the direction of Aldi in Palmerston Road.

It was only after this that the victim unwrapped the new bracelet and discovered her own – an 18-carat gold bracelet with two small catches – was missing.

Sergeant Steve Boston, of Dorset Police, said: “We are making enquiries into this distraction theft and have obtained a CCTV image of a woman we would like to speak to as part of our investigation.

“I would urge anyone with information as to her identity to please get in touch.”