Dorset Police Chief Constable James Vaughan spoke to BH Living today 24 March 2020 about the current Coronavirus pandemic, and to appeal for the public’s help to get through this difficult time. “We’re all in this together” he said, “But we really need to appeal to the public to help get through this. There will be added pressure on frontline Police Officers but also on support staff”. 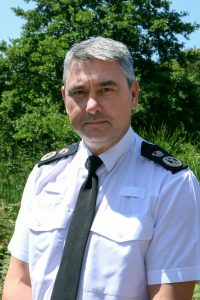 Following the Prime Minister’s address to the nation last night, stringent measures have been introduced to slow down the spread of Coronavirus. From midnight last night (23 March 2020), all UK citizens have been instructed to stay indoors and not to venture out except for the following;

In the latest measures, the Prime Minister said that shops selling ‘non-essential goods’ including clothes and electronics should close. Similarly Libraries, playgrounds, gyms (outdoor and indoor) and places of worship will also be closed to the public. Gatherings of 2 or more people are banned and there will be no weddings or baptisms allowed for at least 12 weeks, but this could be extended after the government reviews the situation at a later date.

In his address, the PM said that Police would be given more powers to ensure that people abide by the Government’s instructions. Police have already been told to disperse any public gatherings but in further measures being rushed through parliament, Police will be given new powers to issue fines to those who do not obey the governments instructions to stay home.

“We don’t want to be issuing fines and prosecuting people” said Vaughan, “and we’re hoping that everybody will recognise the seriousness of the situation and stay home, however, Dorset Police will be implementing ‘more intrusive measure’ including stopping cars and finding out the details of peoples journeys. We’ll also be noting journeys and activities.

“We expect the public to co-operate with government advice but we have the power to deal with those who don’t” he added.

Asked whether the Police had the resources they need to deal with the current crisis, Vaughan was upbeat. “Our officers are ready. We have various contingency plans that were already in place, to ensure we can continue effective policing and more importantly, to ensure the public feel safe” said Vaughan, “Our officers are also observing ‘the 2 metre rule’ where possible but as you can appreciate it can be quite hard when you’re arresting somebody!

We’re waiting for more protective equipment to arrive for officers. The equipment is available but there has been a supply issue, which the Home Office have addressed and they’ve drafted in the army to get supplies moving. We’re hopefully getting new supplies soon which will include facemasks, gloves and hand sanitisers but the NHS are rightly being prioritised for these supplies first.”

With the new measures on the banning of groups of two or more people, the Police Chief confirmed that they had seen a big increase in incoming calls from the public informing them of people not observing the new rules, but he appealed to the public to not call in with these details: “The service is under increased pressure as you can imagine, we need to keep the lines open as much as possible so I’d like to encourage people to use our website to report anything or email their neighbourhood policing team.

“We realise the public need to see a police presence, as they should and always will do, so we’re ensuring high visibility both on foot and in vehicles. We’ll be patrolling public spaces, supermarkets and petrol stations.” he confirmed.

Asked whether the Police had seen more incidents in supermarkets, hence the added patrols, Vaughan added “we’ve seen a few minor incidents but we want shop owners and supermarkets to know they are being supported by Dorset Police.”

BH Living also asked Mr Vaughan whether Dorset Police were fully prepared for every eventuality. Do they have plans in place if 999 control centre staff fall ill?. “We’re fully prepared” said Vaughan reassuringly. “we’ve already had a couple of incidences of control room staff self isolating, but we have other non-urgent staff that can be transferred to control room operations to ensure we continue to receive emergency calls from the public.

“But I really need to appeal to the public to only call the police if absolutely necessary. Both our 999 and 101 services are going to be very busy, so please only call us if it’s something serious. If it’s a dispute with a neighbour or something that is fairly minor and can wait for a few weeks until the current crisis is over, we’d encourage people to postpone calling us – or contact us via the Dorset Police website“.

“There are just two things that we’re asking the public to do to help Dorset Police at this time; 1) Please, please adhere to government advice to stay indoors, 2)Think before you call us, if it’s not urgent, don’t call. we want to be here for the people who really need us at this time”

You can report minor incidents online instead of calling 101 by visiting Dorset Police’s ‘Do it online’ website portal. It’s quick and easy and can then be prioritised by Police against current work pressures.