When it closed in June 2019, most of the residents in the village of Burton feared The Manor pub would close for good, but today (12 March 2020) locals will see the official reopening of the pub, now completely refurbished and renamed ‘The Bear of Burton’.

An unwelcome but familiar trend has prevailed across the hospitality industry over the past decade: pubs closing across the country at an alarming rate. But last year saw that trend bucked for the first time in over 10 years.

And it’s good news for the folk of Burton and the surrounding areas as they see the old ‘Manor’ transformed into a delightful hotel boasting thoughtful and engaging interior design and a mouthwatering, inspired menu offering an array of local produce.

The Bear of Burton has drawn its inspiration from the fairytale ‘Goldilocks and the three bears’ originally written by author Robert Southey whilst he lived in Burton between 1799 and 1805. 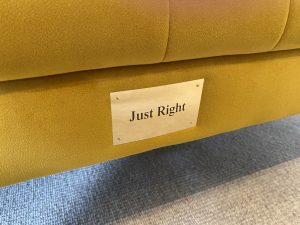 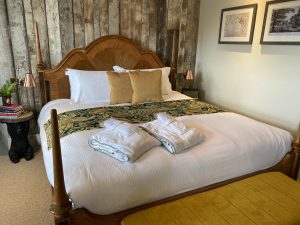 The bedrooms are named after local woodlands where the three bears may well have taken their walk whilst waiting for their porridge to cool.

Porridge is not a dish offered on the main menu, but what is is a varied mix of culinary delights; from leg of lamb and dry-aged rib-eye steak, to vegetarian and vegan options including chargrilled tenderstem brocolli with quinoa, green olives, almonds and dates. 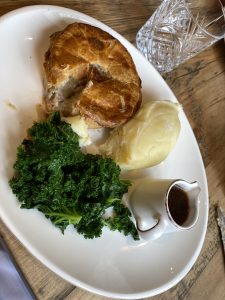 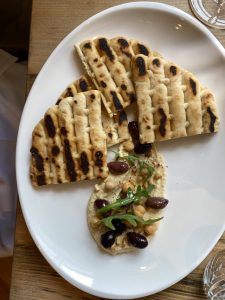 Flatbread with olives and Hummus starter 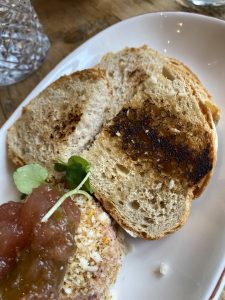 I opted for the chicken liverparfait pate with orange and cardomon crumb and fig chutney for starters, followed by homemade chicken, ham and honeydew pie with creamy mash and fresh kale, complete with a tiny gravy boat to add a touch more of the brown stuff – very thoughtful for a gravy lover like me. My wife plumped for the grilled flatbread with hummus and olives followed by Fullers battered cod with home made chips and crushed minted peas.

Both portions were generous and beat us both. We’re both post-christmas weight-watching and as tempting as the desserts were; Ricotta fritters with creme fraiche and orange syrup…..we had to resist. We wanted to stay longer and enjoy the wonderful airy and relaxed ambience so we finished off with a capuccino each, which was good enough to rival the big coffee chains of Café Nero and Costa Coffee. 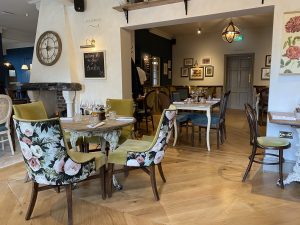 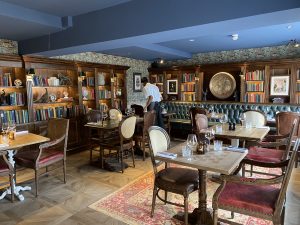 Throughout the bar, restaurant and hotel, there were thoughtful references to the Goldilocks story. The kitchen door is labelled ‘The heart of the bear’, some of the seats in the bedrooms have small plaques on them which read ‘just right’ in a nod to the points in the story when Goldilocks says to herself that Baby Bear’s chair, porridge and ultimately bed are ‘just right’. Even the door handles in the rooms are shaped like a bears head.

Owners Fullers have appointed a really passionate team of people who all seemed very attentive. I was later told that the staff were appointed on their ability to interact and engage with the public as opposed to waiting or bar experience. “Waiting and bar service can be taught and people can be trained, but being friendly, attentive and personable is something we want to be the priority” said Deputy Manager David, “so we interviewed people without viewing CV’s and made our decisions to hire from the huge volume of applicants we had, purely on personality and whether we thought they would fit in and make our customers feel welcome” 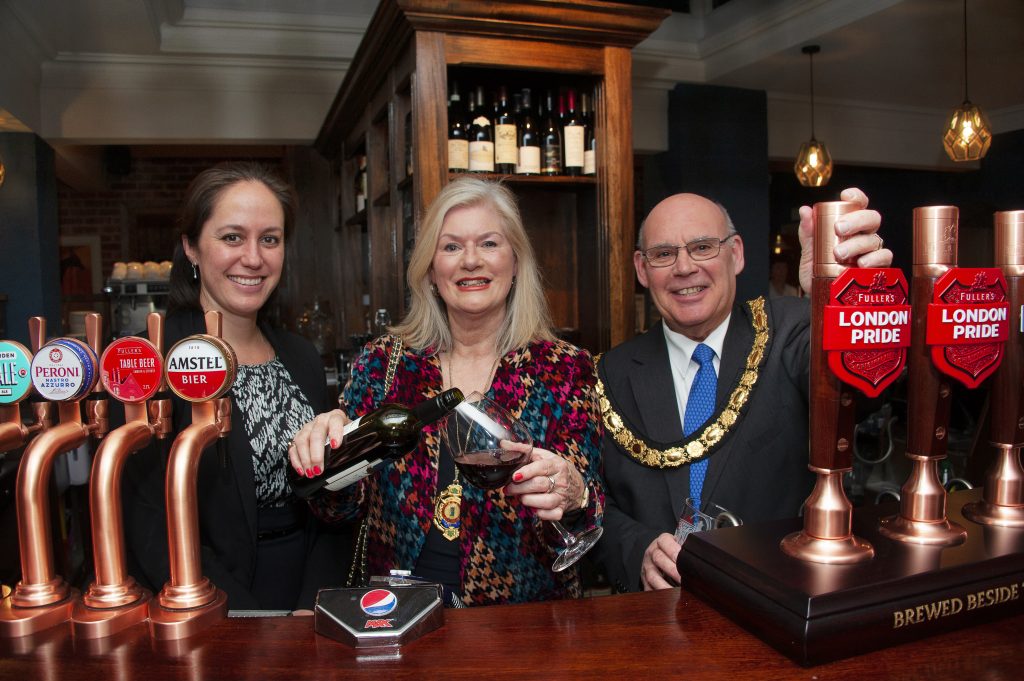