A ceremony was held on Monday 3 February to celebrate the milestone of the development reaching its highest point- traditionally known as ‘topping out’.

The £12m Tree Tops scheme will provide 46 new one-, two-, and three-bedroomed apartments, aimed at the family rental market, helping to contribute to the creation of sustainable communities in the town centre.

The scheme is led by the Bournemouth Development Company, a public-private partnership between BCP Council and Morgan Sindall Investments. As well as providing high-quality, contemporary homes for local families, this project will also return profits back to the Council for investment in future regeneration projects – two of the main aims of the partnership.

The development, due to be completed at the end of 2020. will see the 46 apartments split into 28 and 18 flats across two multi-storey blocks. Both of these have been sensitively designed to combine traditional external materials such as brick, with contemporary architecture, to complement rather than detract from the neighbouring St Stephen’s Church.

Around 20 guests including civic leaders, project partners and construction workers attended the topping out ceremony which included the planting of a tree in the grounds. Once the tree was taken to the top of the highest block, it was planted in the grounds by Cllr Vikki Slade. 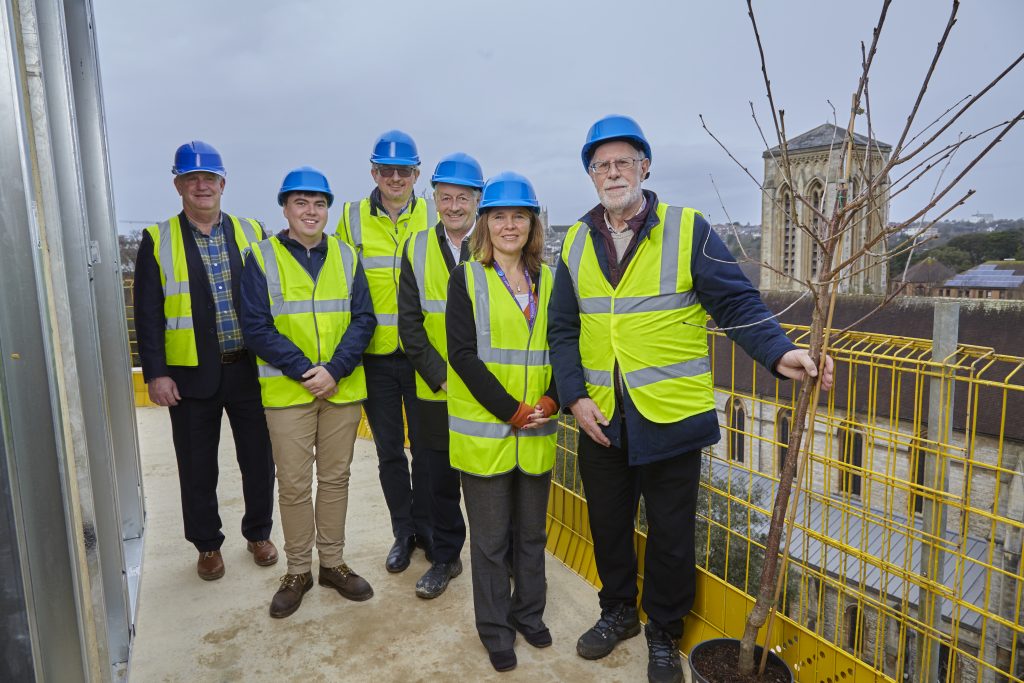 Commenting on the milestone achievement, Cllr Vikki Slade, Leader of BCP Council, said: “It’s been really exciting to see this new development take shape in a way that both enhances and compliments the local area.

“An excellent example of what can be achieved through public and private sector partnerships, once completed it will deliver attractive and much-needed new homes for our community. This will support our vision for the area and the growth of Bournemouth’s town centre as great place for people to live, work and spend their spare time.”

Duncan Johnston, Director, Bournemouth Development Company, said: “The Tree Tops scheme is well on its way to completion, which is great news for Bournemouth, and is another step towards regenerating the town centre and delivering funds back to the Council for future regeneration.

“We are delighted to have been able to transform this previously under-used and awkward site into a modern, sustainable development that will provide safe and secure homes for families well into the future.”

BCP Council will retain ownership of the site and purchase the completed development as a long-term investment asset. The homes will then be operated as a private-sector rental scheme via the Council’s wholly owned services company Seascape Ltd under a 25-year lease.