Charlotte Brontë’s Jane Eyre is a story of love, dark passions and secrets. It opened in Poole last night (Tuesday 4 February 2020) for the first of a two night stop as part of its nationwide tour. This production by the Blackeyed Theatre Group with stage adaptation by Nick Lane kept true to the original story but with a few minor changes. None of the changes detracted from the intimacy of the much loved literary classic. 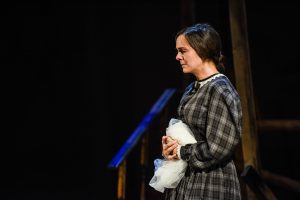 This is a brave production – the stage is a simple, uncomplicated wooden set which included a piano. The costumes worn by the actors are impeccably faithful to the period. A couple of the small additions add some welcome humour to what is a tragic heart churning story of ‘Jane’. We witness her tough upbringing, her formative adult years, and her years as a Governess for Mr Rochester. We journey with her learning through life’s ups and (mostly) downs as she eventually has the courage to follow her heart.

Jane is superbly played by Kelsey Short who puts her heart and soul into the play with Ben Warwick playing Mr Edward Rochester. The whole cast, just five in total, were all highly skilled, multi-talented performers and deserve to be recognised for the expressive and creative way in which they portrayed the characters. The play lasted a little over two and half hours which is no mean feat for such a small cast. 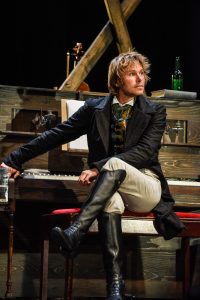 This is a powerful story – those who have read the book will understand the power behind the words. Those who have not, will undoubtably watch this play and resolve to read the book. In my opinion the story of Jane Eyre really is one of the greatest literary works by the pen of a female author, and this excellent production has kept the story alive.

The Blackeyed Theatre Groups production of Jane Eyre continues its tour in Poole tonight (5 Feb) with both a Matinee and an evening performance. The show then continues its UK tour with the next local performance not taking place until 16 – 18 March when it arrives in Portsmouth.