Following the general election, BH Living took to the streets to find out how local people were feeling about the result. Members of the public living in Christchurch gave us their views about the conservative landslide victory.

“My immediate thoughts were that I’m not terribly enthusiastic about it. I was going to vote but I wasn’t feeling very good at the time but if I’d have voted I probably would have voted Conservative. I’m a bible believing man, so I’d probably look up there first before I have a look at the government.” – Laurie

Laurie’s lack of enthusiasm about this election was backed up by figures released by the BBC that confirmed voting numbers were down by approximately 1.5% compared to the previous general election, despite high turnout predictions prior to the election.

Despite Labour’s efforts to make the election about more than Brexit, it was the subject that seemed to concern most of the electorate, the party later conceding that they failed to attract voters to their second referendum policy and that their stance had led to the loss of seats in former strongholds.

“I’m pleased with the result to be honest, I voted Conservative and I feel It’s the only way to go. I don’t think you could have trusted Labour with Corbyn in charge. I feel this is the only way to get Brexit done.” – John

Out of the more than 30 bills announced in the Queen’s Speech, seven were on Brexit. It comes as the government says it will close its Department for Exiting the European Union on 31 January 2020.

In the second Queen’s Speech in a matter of weeks, Boris Johnson’s government has indicated that it will introduce new laws to accelerate the delivery of gigabit-capable broadband across the UK but local resident Jess expressed some reservations about the policy.

“The prime minister offering faster broadband is all good but the amount we’re going to have to pay is going to be rough on people like me who don’t have money laying about.” – Jess

“I couldn’t care less one way or the other. I didn’t vote and I haven’t voted for quite a number of years because I think none of them have any brains. [Having a Conservative government] doesn’t give me hope, it worries me a little bit because they’re talking about taking the bus passes away and I’d be absolutely lost without my bus pass.” – Maureen

Only one week on from the election, it was clear from talking to Maureen (above) as well as other residents in one of the safest Tory seats in the country, that many people have been left feeling non-plussed about politics and beleaguered by recent events in Westminster.

With many residents now hoping for a period of stability, only time will tell if their Christmas wish will come true. 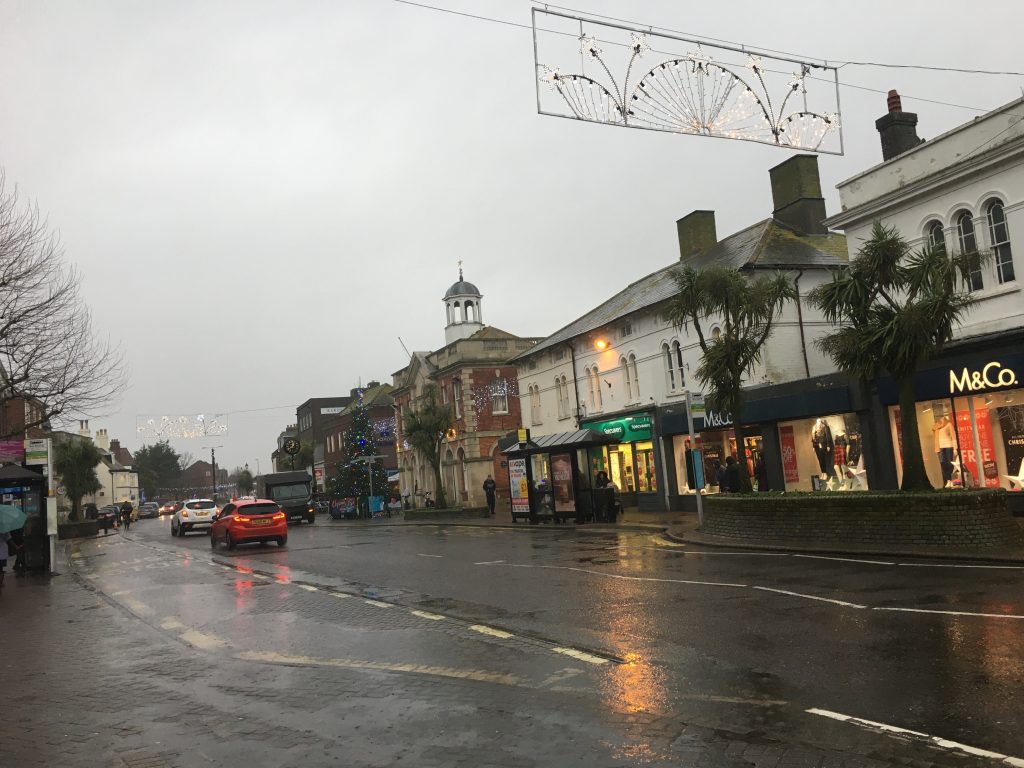 Christchurch High Street in the rain