Bournemouth Police have released CCTV images of a man and woman, who together are believed to be responsible for two incidents of theft.

The first incident happened at 6.50pm on 2 October at an Esso service station on Bath Road, involving both the man and the woman.

The two were asked for various tobacco items at the service station worth a total amount of £63.65, before the man left the store with the items, leaving the woman to pay.

After her card failed to work, the woman left the store to find the man, after which neither of them returned to pay.

In the second incident, a suspect thought to be the same woman from the service station entered Waitrose and stole two bottle of alcohol.

Police Sergeant Carmel Ryan, of Dorset Police, confirmed that: “It is believed that the same woman was involved in both of these incidents.

“As part of my enquiries I have obtained CCTV images of the suspects and would urge anyone with information about their identity to please come forward.” 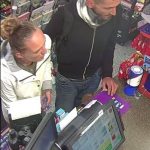 CCTV image: the man and woman suspected to have stolen from Esso

Anyone with information is asked to contact Dorset Police, via email or by calling 101, quoting occurrence number 55190156085.