No Spoilers in this review:

The lights dimmed and the air in the room started to fill with music heralding the imminent arrival of unnerving terror. A door opens and in enters our narrator for the evening, R M Lloyd Parry. He walks across the room and sits in a solitary chair lit only by the candles of his three pronged candelabra. He pours, what looks like a Whisky from a fine decanter, inhales a short breath while he looks around the room and begins a captivating story of terror. The 130 seat Sherling Studio in the Lighthouse Poole is the perfect setting for a spine chilling Ghost Story and with the atmospheric ambiance this room creates he had the audience in his grip.

These two ghost stories were originally written by M R James (Montague Rhodes James,1862–1936) who wrote many of his ghost stories with the intention of them being read aloud in the long tradition of spooky night time tales. Last night (18 December 2019) two of these stories, ‘A View from a Hill’ and ‘The Treasure of Abbot Thomas’ were read as part of Nunkie Theatres sixth instalment of the M R James project, this part entitled ‘Dead Mans Eyes’.

In the first story, A View from a Hill we hear about a pair of old binoculars, Mr Baxters old binoculars, which are borrowed by a person visiting a friend in the South West of England. Though this 45 minute story, we get taken back into the grisly history behind these seemingly ordinary pair of binoculars. 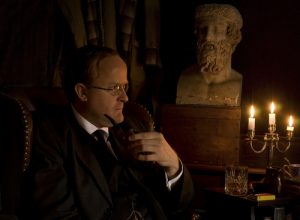 After a short interval, we have a repeat of the same opening. Again R M Lloyd Parry simply walks into the room, repeats the same process and begins another 45 minutes of story telling terror. In this story “The Treasure of Abbot Thomas” the tale takes us to the bottom of an ancient well. What lays at the bottom? This I will not share with you but needless to say this story did have a few in the audience jump with his vivid description.

The performance ends as it begins, in silence, he simply extinguishes the candles, accepts the applause and leaves the room.

This was an evening of pure enjoyment, the way the narrator performs the stories, the way in which he projects his voice around the room along with the movement of his hands adding to the description of the story, really does leave the audience gripped by the phenomenal delivery of his story telling.

Dead Mans Eyes is again performed at Lighthouse Poole tonight, 19 December. If you wish to escape the horrors of Christmas shopping, then the intimate setting of a small studio for this chilling performance is highly recommended. Limited tickets are available and can be found at Lighthouse Poole website here