Officers are releasing CCTV footage of a suspected burglar who took a bank card in October, appealing for anyone with information to come forward.

A bank card was reportedly taken from a room in Maemar Hotel in West Hill Road between 10 and 10.20am on Sunday 6th October.

A gust had been informed by her bank that her card was being used in a nearby store after she had left it in her hotel room and gone out. She discovered the card was when she returned to the hotel. 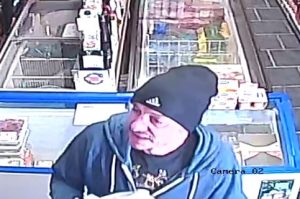 Bournemouth Police Constable Kim Ward said: “Following enquiries into this incident, I am now in a position to release a CCTV image of a man I would like to speak with.

“I am hoping that somebody might recognise him and can help us to identify him.”

Anyone with information is asked to contact Dorset Police via email or by calling 101, quoting occurrence number 55190157673. Alternatively, contact Crimestoppers anonymously by calling 0800 555 111.