Bournemouth saw the return of pantomime at the Pavillion Theatre with a tantilising performance of Aladdin, starring X-Factor’s Amelia Lily and Richard Blackman from Eastenders.

A sold-out theatre saw a brilliant performance of Aladdin, telling the story of how the young protaginist overcomes his poverty and rivalry with Abanazar in his quest for love, with a modern-day twist. 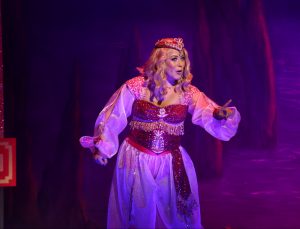 like Widow Twankey’s laundrettes and Aladdin’s exhilarating magic carpet ride, where we saw the play’s hero (Anthony Rickman) take off from the streets of China all the way into space!

The show had laugh-out-loud moments from beginning to end and though the actors broke character and forgot lines throughout, it made the show even funnier as they reminded the audience that they’d already paid and brought new meaning to the term ‘breaking the fourth wall’!

A performance to remember

The audience got to see some famous faces join the cast, as well as some familiar faces return to the Pavilion.

The X Factor’s Amelia Lily gave a radiant performance as she showcased her amazing voice as the Spirit of the Ring and Bournemouth welcomed the return of David Ball as Widow Twankey, who gave yet another hilarious performance.

At first, Aladdin and Jasmine’s (Kelly Agredo) on-stage chemistry was unconvincing, however, as their confidence grew throughout the play, they began complementing each other’s performances, especially in Jasmine’s rendition of “Don’t you worry about a thing!” which captivated the audience. 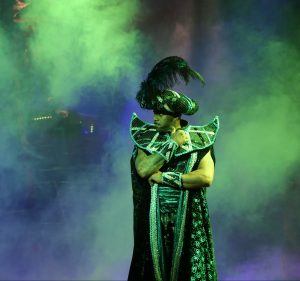 Callum Tempest brought a sassiness to his role as the Genie of the lamp that Robin Williams and Will Smith (former genies) would be proud of.

A show for all ages

The play managed to keep everyone entertained, with the children in the audience treated to an outlandish performance by Aladdins’ brother Wishee Washee (played by Noel Brodie), who made his grand appearance to the stage singing 2019 smash hit ‘Old Town Road’ by Lil Nas X.

Despite many older members of the audience hoping for a Lil’ less of the pop culture references, there really was something for everyone, as the cast made several political jibes, poking fun at Boris Johnson at times and even mocking AFC Bournemouth at one point. It was an unforgettable moment when Widow Twankie compared her bra to The Cherries, saying it had “all the support, with no cups!”.

It also brought a smile to everyone’s face when Brodie appeared on stage wearing an Edgar the Excitable costume – a not-so-subtle  the beloved dragon who stars In John Lewis’ hugely popular Christmas advert this year.

All in all, it made for a great night out and if you need a place to escape the stress of life for a few hours then Aladdin at the Bournemouth Pavilion Theatre is the perfect place to go with laughs-a-plenty.