The South Coast Kart Club is holding their championship finals this Wednesday 11 December at the track near Hurn Airport.

Many motor racers, such as Lewis Hamilton or Jenson Button, start off as youngsters at grass roots level in kart racing where they learn their trade and push to progress further.

Members of South Coast Kart Club meet once a month to compete on a track near Hurn airport striving to earn a place on the podium and take away a trophy.

Off the track, members of the club are all friends and socialise, but as soon as the helmets go on and the lights go green it’s every driver for themselves, although the marshals are always on hand to keep everything civil and make the difficult decisions.

The 2019 Heavyweight Section has already been sewn up with Anwar Beroual Smith taking the championship already, even with the finals still to take place.

Gary Elford, a Heavyweight driver at the club currently sitting at 4th place, said: “It’s been a storming year for Anwar who’s experience has shone through with good consistent drives from Josh [Hebden] and Mark [Williamson], inconsistency in earlier rounds has cost me but I’ll be back in 2020.”

The lightweight section is still wide open where although Josh Heald has a 14-point lead he cannot make the final round.

Second and Third place drivers, Will Hussey and Caleb Buxton, respectively, lie in wait locked on the same score hoping to get a bit of luck and snatch the cup from Josh’s hands.

Caleb commented: “The lights is a very open category with 4 or 5 individuals capable of putting on a good show on any particular night.”

Rival, and past champion, Will added: “This season has been tougher than when I won it last year, everyone has improved and I have had to up my game accordingly.” 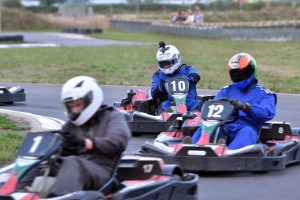 All the drivers were impressed with this year’s kart preparation from the Lovell family, who own the track and along with their team they work on the kart fleet all day before racing.

Martin Coombes, a racer since 2017, said: “Looking forward to round 10 myself personally, one of the top 3 championship places is just too much out of my grasp but another podium finish like in the past 2 rounds would be very welcome.

“With the help of my fellow racers and the staff at the track my racing has come on leaps and bounds since starting in 2017, long may it continue towards more trophies!”

The club always welcomes new members. If you are interested in taking part, speak to the team at South Coast Karting about one of the upcoming competitions.