The annual festival of light art will continue after dark with a series of educational talks held at at Lighthouse, Poole’s centre for the arts.

The festival will take place on February 20th to 22nd next year and this time the theme is ‘spectrum’. Funded by Arts Council England and main sponsor Poole BID, with additional contributions from BCP Council and private businesses, the event will showcase the work of local, emerging and international artists with a series of commissioned digital light art installations and projections as well as creative participation events, educational elements and guest speakers to show Poole in a new light. 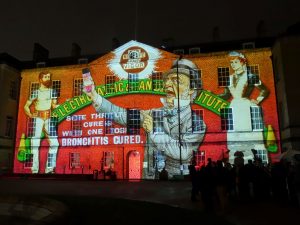 The speakers will include TV historian Dr Janina Ramirez, Senior Science Advisor at the European Space Agency and Cressida Granger, MD of Mathmos and researchers from Oxford University’s Diseases of Modern Life Group.

“Each talk is an opportunity for people to come along and find out a bit more about the stories behind the Art they are going to see in the festival,” says light artist Ross Ashton who has programmed the talks and as The Projection Studio showed works at last year’s Light Up Poole.

“We’re covering a wide range of topics with some fascinating responses to the ‘Spectrum’ theme. I don’t know of any other light festivals that are doing this, but we’ve done a lot of work with academics and found the cross pollination of ideas is huge”