Opera’s temptress of seduction, Carmen, last night thrilled the Mayflower Theatre with a stunning portrayal of this classic Georges Bizet Opera in this ‘recent past’ modern production. This was the first of a four night run by the Welsh National Opera in which they are also performing “Rigoletto” and “The Cunning Little Vixen” and runs through until this Friday, 30 November. 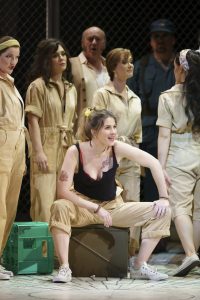 Being a bit of a ‘traditionalist’, I was initially taken aback by the opening scene of the performance. The traditional dark-haired gypsy temptress draped in her stunning flowing red dress was nowhere to be seen. Instead Carmen was presented to us, still as a factory worker in a cigarette factory, but set in a revolutionary 1970’s South American state outside an army camp. A well-armed military patrol was also seemingly watching over us, the audience. The effect they have created in this production I can assure you is totally stunning and generates three hours of compelling opera.

The story is traditional – let’s be honest, it’s so perfect it could not be anything else. Moralés along with the other soldiers are waiting at the factory gate for the girls to have their break and it is here we meet José. Carmen throws José a flower which he picks up and immediately becomes seduced by her irresistible charms. It is also here we meet Micaela, the sweet village girl whom José’s mother hoped he would one day marry.

Carmen, later involved in a fight with another woman, sees José sent to prison for aiding her escape. Sometime later and with José soon to be released Carmen meets up with Escamillo, a popular and successful Bullfighter.

As time goes by, Carmen falls out of love with José. She is a tough woman who lives by her independence and 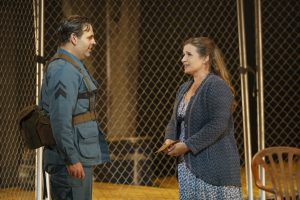 resisting his jealousy she predicts death for both of them. Micaela, our village girl returns to plead for José to return home to see his dying mother which he does. But it is not long before they all meet up again at the Bullfight for our dramatic finalé.

This performance has it all; drama, love, passion but also a dark, sinister side, helped by the modern setting of this classical drama. There is a lighter side too, with the portrayal of everyday normal life, and in one scene there was so much to see, I missed the lady hanging her washing up on the line – something that was mentioned to me at the interval. Everything you expect to see is in Carmen is in this performance as are the ever popular Toreador’s Song and Habenera. 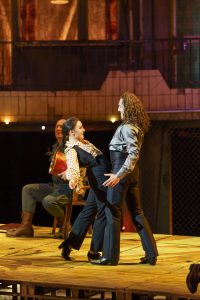 The entire cast put on a phenomenal performance and are all worthy of mention. Carmen is played by Virginie Verrez with José played by Dimitri Pittas – both are outstanding in their roles. The dance scene needs to be highlighted for a special mention. Performed by Josie Sinnadurai and Carmine De Amicis, the dance included a sultry and well executed Argine Tango. The live orchestra conducted by Tomas Hanus were faultless and were worthy of the applause at the end.

This is a new production of Carmen first performed in Cardiff in September 2019 and now touring the UK. The opera is in four Acts sung in French with English Subtitles. Carmen is being performed again on Friday 29 November with two other well-known Operas (“Rigoletto” and “The Cunning Little Vixen”) Being performed on Wednesday 27th and Thursday 28th respectively.

For tickets visit the Mayflower website here or call the box office 02380 711 811. If you miss any of these performances then the Welsh National Opera are back performing in Southampton this coming March 2020.