The award-winning Highcliffe Charity Players’ New Year pantomime has been announced as Jack and the beanstalk.

The panto will be shown at the Regent Centre in Christchurch from the 18th to 25th January. It will run 10 performances, including three matinees, a mid-morning and tea time show.

The script has been specially written by Company members – Stephen Hutt and Charles Michael Duke.

“It’s been a blast penning the HCP Panto again,” says 26-year-old Stephen. “The Players have a flair for comedy that is a joy to write for. We just hope we’ve pulled off another successful panto recipe – this time with beans!”

HCP Chairman, Georgina Smith, who herself once played Jack, is now directing her son Stanley, 19, in the role. 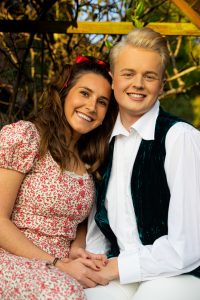 Sophie and Stanley will perform in the production

Stanley said: “I couldn’t quite believe it when I landed the part of Jack – me, principal boy! Jack is very different from the pantomime characters I’ve played before, but I’m relishing taking on the challenge. Bring it on!”

Playing Jack’s love interest Jill is Sophie Kerslake, 19. “I’ve appeared in several HCP shows before but always in the chorus,”  she says, “so I’m really excited to have won my ever first role and just can’t wait to get up on stage!”

Returning to play Dame after a six-year gap is Stuart Tizzard, who is renowned for his outrageous comedy routines.

“It’s a privilege to be back”, he says, “It gives idiots like me the chance to ad lib and have fun with the audience, whether planned or off the cuff!”