Following the resignation of their Deputy Chairman, are cracks starting to show in the Christchurch and East Dorset constituency?

On Tuesday, Rhys Gadsby took to twitter to announce his resignation just three weeks before the general election.

It was announced today that the reason for his shock departure is down to an ongoing spat with Tory candidate Sir Chris Chope.

Chope was recently chosen to represent Christchurch in the upcoming general elections despite failing to win the support of the executive committee.

He is well known for blocking several popular bills in Parliament, including bids to tighten laws on FGM and upskirting – a move which has been heavily criticised by Gadsby.

After the news broke, Gadsby once again took to Twitter, calling Chope ‘cowardly’ for his lack of campaigning in the run up to the election.

Not only is Chope under fire from his own team, Christchurch locals are applying the pressure too. Local woman, Lorna Rees, has started the ‘Safe Seat’ campaign to make others aware of Chope’s questionable actions. 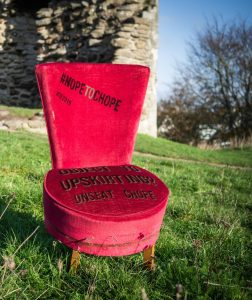 As part of the campaign, the team have created 28 unique chairs, one for every day of the election. The chairs are decorated with messages and left across the Christchurch area to encourage people to think before they vote.

“Many people, even those who have voted for and campaigned for the Conservative party all their lives find it impossible to support him.

“We hope the chairs make people smile and encourage people to vote chairfully.”

Since being first elected in 1997, Sir Chris Chope, now 72, has secured one of the safest conservative seats in the UK. In the 2017 elections, he won almost 70% of the vote, the largest Conservative majority in the country.