The YMCA’s Big Sleep Easy was a huge success this weekend with over 160 volunteers raising money to combat homelessness.

Over 30 organisations took part in the event on Saturday which saw volunteers sleep outside under cardboard box shelters in temperatures that reached minus 2 degrees.

Amongst the generous sponsors of the event were Bournemouth University and solicitors Preston Redman. Also deeply involved were Dorset Chamber of Commerce, whose chief executive Ian Girling was amongst those sleeping out. 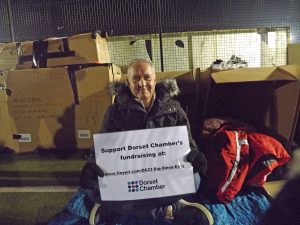 Ian (pictured) said: “We’ve been concerned at the level of homelessness in Dorset, so were keen to support this fantastic cause.

“Our staff have really thrown ourselves at it and there are also lots of Chamber members taking part.”

Aided by hats and scarves from ‘Knit and Natter’ groups, participants spent the evening designing shelters out of cardboard boxes.

Castles, tanks, teepees and cheese wedges were amongst the designs, but driving school Flying Colours won with a cardboard car.

Participant Kirsty Lee of Our Dorset, a local partnership of health and social care organisations, said: “What a fantastic event. It was so cold but we know we had it relatively easy: boxes, tarpaulin, hot drinks and, unlike rough sleepers, we felt safe. It was a real eye-opener: we can’t begin to imagine what it’s like for them.” 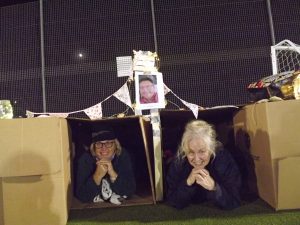 Sarah and Heather took part in memory of their friend Mark

“For some, their reasons for taking part were personal. Heather Daly was sleeping out in memory of her friend and former work colleague Mark. Despite being homeless himself, Mark had planned to take part but sadly passed away in September. Instead, Heather’s friend Sarah Gallagher, Mark’s support worker, took his place.

“Everyone who knew Mark just remembers how funny he was,” said Heather. “He suffered from alcoholism and tried to give it up, but it was too late. His friends have come together and we’ve raised almost £1000. Anyone can become homeless and no one should be sleeping on the streets. We did this for Mark and he was with us through the night.”

Gareth Sherwood, YMCA Bournemouth’s CEO, was hugely impressed by the commitment of the participants: “It’s a controlled environment but even if it’s just a flavour of what’s it’s like to sleep rough, it can change perspectives.

“Homelessness is not somebody else’s problem, it’s all of ours and the companies and individuals who took part get that. They are making a difference and we are hugely grateful to them all.”