Chefs from care home provider Colten Care battled it out to be crowned the group’s star baker.

Eighteen chefs from Colten care homes in Lymington, Sherborne, Chichester and Ferndown participated in the challenge of who could create the most original and spectacular cake.

A range of different cakes were presented, from a Pumpkin and Pecan cake, to a Liverpool FC-themed sponge cake, with one competitor creating a chocolate and bacon cake. The resulting confections were displayed and judged at Bourne View, Colten Care’s newest home in Poole. 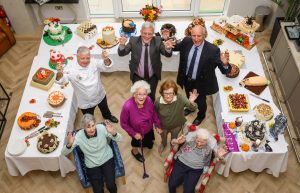 Allan Davison-Collier, Head of Curriculum for Hospitality and Visitor Economy at Brockenhurst College headed the panel of judges for the competition.

He said: “What a great display of skills and talent from the chefs at Colten Care. It was great to be involved in such an innovative competition where the residents also played such an important part.”

Colten Care’s co-founder John Colwell and its Executive chairman Ian Hudson were amongst the judging panel.

John said: “Some cakes were unusual such as the unique chocolate and bacon cake, but all were simply delicious and we congratulate every chef who took part.”

Myrtle expressed how much fun she had being on the judging panel however found it “awfully difficult to choose from such a fabulous selection of cakes.” 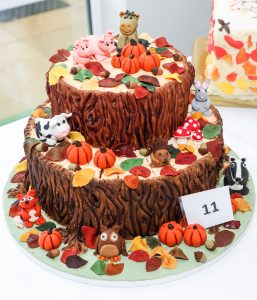 Liz said: “The cakes were wonderfully decorated. I especially liked the Bacon and Chocolate cake because it was so unusual.”

After a great deal of tasting and much deliberation, the winner was announced as Hannah Clark, Chef at Colten Care’s Court Lodge in Lymington.

She said: “I’m absolutely thrilled to be named winner amongst so many fabulous cakes from so many talented chefs.”