Bournemouth Rugby will be arriving at games in style thanks to their new transport partner – Yellow Coaches.

The company, which is part of Yellow Buses, has marked the partnership by decorating a vehicle in the club’s colours.

The rugby club, which was recently bought out by the management team from its French owners, have signed a two-year deal with the Yellows.

Following their promotion to national division two last season, the Lions are now having to travel further than ever before. Players will now be delivered to games in comfort and luxury in the 53-seat coach which includes toilet facilities. 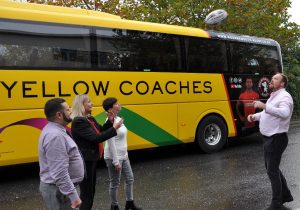 James Croker, Chief Executive Officer of Bournemouth Rugby, said: “We are now competing against teams with big budgets and we remain amateur, so any advantage we can give ourselves is hugely important and travelling in comfort is one such thing, which we will now be able to do thanks to Yellow Coaches.

“Having a dedicated coach makes us feel more professional which is crucial when playing against professional teams.”

Fiona Harwood from Yellow Buses said: “Being Bournemouth-based, we are keen to support the town’s teams. “We have a partnership with the Cherries and will now be adding our weight to the Lions. We are proud to be a driving force in raising awareness of Bournemouth Rugby.”