Christchurch scouts were flying high at the official opening of their new scout hut after 12 years of fundraising for the £186,000 cost.

The 8th Burton Group held the celebration at Martins Hill Close after working tirelessly to build up a fund to replace their old hut which was ‘unfit for purpose’. 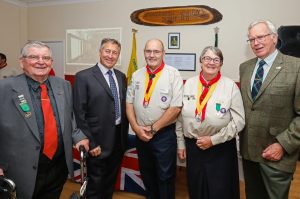 Bournemouth Airport was among the supporters with a £10,000 donation and its operations director Tim Etches attended the opening ceremony along with other guests. Christchurch Mayor Lesley Dedman and Scout Group President John Downer cut a ribbon to declare the hut open.

Guests from other organisations and individual supporters were also present at the celebration as well as beavers, cubs and scouts.

Tim said: “Congratulations to all at the 8th Burton Scout Group on the opening of their superb new hall. “Bournemouth Airport considers itself very much part of the community and we were keen to support the tireless efforts of the group in raising such a tremendous amount for their new hut.”

The 8th Burton Group launched a fundraising drive when its hut reached the end of its useful life after 48 years of service.

After securing planning permission for a new facility, members of the pack, family and supporters held events and enlisted the support of local organisations during an epic 12-year campaign.

“We now have a purpose-built meeting place that is warm and inviting and will give more young people the opportunity to join the troop, have fun and learn valuable skills.

“Our sincere thanks go to Bournemouth Airport and everyone else who has supported us in some way.”