A man who barricaded himself inside a Bournemouth pub, set a fire and threw a heavy object at a police dog has been sentenced to six months in prison.

William Sheen, 23  was sentenced at Bournemouth Crown Court on Thursday 24 October 2019 after pleading guilty at a previous hearing to arson, assaulting an emergency worker and causing unnecessary suffering to a service dog – Police Dog Gus.

At around 10pm on Wednesday 21 August 2019 Sheen entered the George Tapps pub on Old Christchurch Road. Staff described his behaviour as erratic and paranoid and requested for him to leave, which he did.

At around 10.30pm Sheen returned to the premises and entered the kitchen area where he barricaded himself inside with a knife. 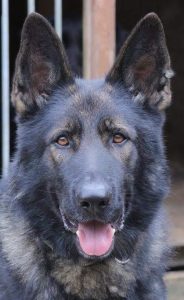 At 11.05pm one of the officers noticed flames coming from the door. Armed officers attended along with PD Gus and his handler and the door was removed.

Sheen began to throw items at the officers, which included commercial-sized tins of baked beans. One of the tins struck PD Gus on the head, stunning him and causing him to back away.

A taser was then deployed and officers were then able to get access to the room and arrest Sheen.

Detective Constable Ben Singleton, of Dorset Police, said: “William Sheen’s actions on this day were violent and extremely reckless. Not only did he put his own life at risk, but also members of staff and public inside the pub along with emergency service workers who attended the incident.

Chief Inspector Heather Dixey, of Dorset Police, said: “Sheen also carried out a violent act against PD Gus and admitted causing unnecessary suffering on that day to a service dog – a new offence brought in under the so-called Finn’s Law. This case yet against demonstrates the danger that can be faced by officers and police dogs while dealing with hostile and volatile incidents.”

Both PD Gus and the officer did not sustain any lasting injuries and they are both back on active duty.