The local dance school was founded by Julie Laming 15 years ago and she had been looking for a permanent home for the school for several years.

Julie is now working in a partnership with the British Legion after she spotted their building to let last year and jumped at the opportunity to make it a part of her school. 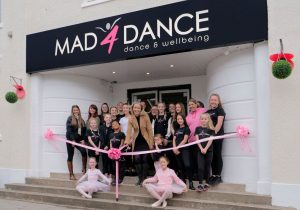 Julie and a group of dance pupils from the local community celebrated their new home by cutting the ribbon outside the building on the 30th October, which happened to coincide with the school’s 15th year of business.

The official opening has come after a year and a half of legal negotiations and refurbishment that has cost over £50,000. Some of this was raised through fundraising and donations within the local community.

The pupils’ parents also got behind Julie to show support as many gave their time and services for free to help refurbish the building. Together they built three new dance studios, changing rooms, a chill out space and kitchen on the whole of the ground floor.

Julie said: “I was moved and deeply grateful for all the support of my team, students and parents who gave so much time and hard work to help make this project possible. There is still work yet to be done, but I am confident that we will get there.”

During the school’s 15 years, over 1,000 children have been taught. The school currently offers up to 30 classes per week, teaching pupils aged 3 to 18.

With their new home, Mad4Dance can develop further, offering more classes, events and a stronger presence within the local community.

Julie’s vision for the new centre isn’t just to provide a place to dance, but to launch a charity based at the school which will focus on supporting young people within the community.

The opening of the school will be celebrated further with a Christmas party in early December and a planned open day in mid-January 2020.