Residents at a Ferndown care home have become ‘generation gamers’ as part of a study into ways of improving the quality of life for people with dementia.

Colten Care’s Fernhill care home at Longham teamed up with Bournemouth University (BU) and Alive, a UK charity for the project, to examine the impact that computer game technology had on people with dementia.

Experts from Alive and the Ageing and Dementia Research Centre (ADRC) at Bournemouth University (BU) trained an eight-strong team of staff at the specialist home – purpose-built for people living with dementia – before they held games sessions with residents. 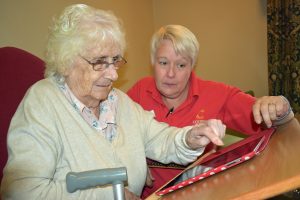 Residents included Ruth Durrant, 92, who goes to Fernhill for day and respite care, and 86 year-old Ken Cobb who said: “I really enjoyed the sessions.”

The sessions were led by Dr Ben Hicks from BU’s ADRC and were held as part of a Higher Education Innovation Funding (HEIF) research project. The aim was to promote the use of digital gaming technology among care practitioners and          explore its impact on the quality of life for people living with dementia.

Companionship team leader Kate Morris said: “There was a real sense of achievement when they played the games or created some music or artwork.

“There’s a misconception that when people get older or have dementia they can’t learn new things, but this shows that they can.”

Fernhill is now looking to start a regular Technology Club in a dedicated room.

Malcolm Burgin, Alive regional manager for the South, said: There was a powerful impact and an obvious benefit. Tennis worked very well and the iPad had a great effect, particularly when people were able to visit places they lived or worked using Google Earth.”

According to the Alzheimer’s Society there are 850,000 people living with dementia in the UK.