Surgeons at the Royal Bournemouth Hospital (RBH) have removed a patient’s bladder using their surgical robot – the first procedure of its kind in Dorset.

Mr Cook had cancer of the bladder and had undergone a number of procedures since being diagnosed in 2017. When he was offered the minimally invasive robotic surgery, he was initially reluctant.

He said: “When I was first approached by Mr Turner asking if I was happy for him to use the robot, my answer was no. But then I spoke to the family and thought, ‘why not be the first person in Dorset to have this op’.”

The milestone operation came just weeks after the RBH team performed their 1,000th procedure using the Da Vinci robot, which was introduced at the hospital in 2013. The robot is controlled by the Trust’s consultant surgeons from an operating console in the theatre and offers higher degrees of vision and control than a human surgeon.

Mr Cook had his operation on 12 September and left hospital within two weeks. “The care I had was very good. The operation was far less invasive so my recovery time was quicker. Besides my stoma bag, I’ve got just five small puncture wounds to show for it.” 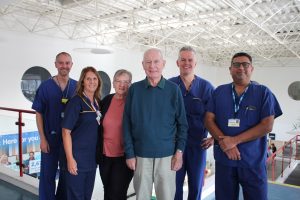 Murray Cook with his wife and the surgical team

His wife Brenda said: “It always felt like the cancer would come back. But now there’s no cancer living in our house and we can’t thank the hospital enough.”

Mr Cook returned to RBH recently to meet his surgical team, and also offered his support to the second patient about to undergo the same procedure. He is now recovering well at home and is keen to get back on the golf course.

When the robot was introduced in 2013, it was mainly used on patients with cancer of the prostate. Within two years, RBH surgeons were using it in colorectal surgery and now more than 1,000 patients have been treated with the innovative technology.

Mr Turner said: “We are at the beginning of a phase of more and more robotic operations. The procedure is so much better for the patient. “Mr Cook’s operation, and the 1,000th robotic procedure, are both really impressive milestones and I’m proud of the whole team for the work they do to change peoples’ lives.”