At approximately 1am on 27 October 2019, a woman in her 20s and her friend were walking on Westover Road when they were approached by a man. It was reported that the man placed his hand underneath the woman’s clothing after touching her leg.

Not too long after this report, another came in with similarities. A woman in her 20s was alone on the beach near to Harry Ramsden’s when a man approached her. The man is said to have kissed her and touched her underneath her clothing, before the victim ran away.It is believed that the offender in both these reports could be the same man. 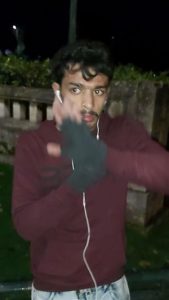 The Police have released a photo of a man they think could have information to help the investigation. They are requesting anybody who has any information about the man in the photo to get in contact with Dorset Police.

Detective Inspector Gavin House, of Bournemouth CID, said: “These incidents were understandably very distressing for the victims and a full investigation is underway.

“I am releasing an image of someone I would like to speak to as they may have information to assist my investigation and I would urge anyone who may recognise him to come forward.

“I am also appealing to anyone who was in the area at the time and saw any suspicious activity to please get in touch.

“There will be increased patrols in the area and officers from the local neighbourhood policing team can be approached with any concerns.”