Beryl, the providers of the popular hybrid bike share scheme in Bournemouth and Poole, are encouraging members of the public to help return their fleet to full capacity during a week-long amnesty which starts today, 21 October. 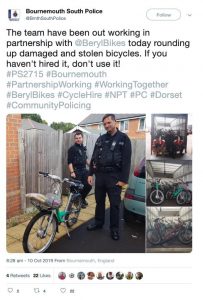 With support from Dorset Police, the British urban cycling brand whose bikes have been cycled over 100,000km since their launch in June this year, are asking people to anonymously report or return misused, vandalised or stolen bikes to the scheme. The amnesty follows recent action from Beryl and Dorset Police where they jointly retrieved bikes from a number of private properties.

The amnesty will run for a week, from Monday 21st until Sunday 27th of October.

Those with bikes currently in their possession are asked to return the bikes to their closest bay during the amnesty period. Members of the community can also anonymously report bikes that are held in private property, vandalised or stolen by calling Beryl on 020 3003 5044 (7 am – 9 pm Monday-Sunday) by email at support@beryl.cc, or reaching their local support team directly in-app.

People returning or reporting bikes can be assured no action will be taken against them or others in possession of a bike during the amnesty period.

Beryl are the first bike share operator in the UK to hold an amnesty in response to vandalism of the scheme. By proactively engaging the wider community the company hopes to give ample opportunity to use the bikes as intended, as well as develop ownership of the scheme in the community.

Beryl CEO, Phillip Ellis, hopes the amnesty will appeal to the better nature of vandals, whose acts can prevent the rest of the community from using the scheme. Ellis reiterates the majority of users have responsibly enjoyed the hybrid bike share scheme.

Ellis said: “In recent months we have seen a few instances of misuse of our bike share scheme. We want to use this amnesty to inform the wider community, those individuals who are taking bikes into private properties and the few that are vandalising bikes, that these actions are criminal offences. Our aim is ultimately to run the bike share scheme at full capacity.”

He added: “Beryl is very proud to serve the community and overall the majority of people in Bournemouth and Poole have been using the Beryl bike share service as intended, we’ve been thrilled with the positive responses received from those using our bikes to cycle to work or for leisure. ”

Chief Inspector Pete Browning of Dorset Police said: “Our role is to prevent and detect crime, therefore, we support any initiative which is reducing theft and criminal damage in our communities. Recently we’ve worked with Beryl to provide advice around crime prevention and ways to reduce opportunities for the scheme to be misused by a small minority.”

He added: “If you cause damage to a bike or fail to return it to the scheme, this is a crime and we will investigate it in line with other similar offences.”