A plaque unveiling ceremony took place at the former Winton Fire Station in memory of Station Officer Jim Collingbourne who was posted at Winton and who subsequently who lost his life whilst attending a blaze on the East Cliff in 1956.

The Fire Station which was decommissioned in 1960, remained largely unused after its closure but was used for storage by Bournemouth University and also as public toilets for a short time. It has now been sensitively redeveloped into flats with commercial/retail space on the ground floor.

First built in the 1920’s, it served Bournemouth along with Bournemouth Central Fire Station in Holdenhurst Road (now a student bar and nightclub), Pokesdown Fire Station, near The Bell Pub (now a block of flats) and later Springbourne Fire Station which is still in operation.

It closed in 1960 in favour of the bigger site at Redhill, but locals still hold fond memories of the old station. Those attending the reopening included local historians Berni Hallam and Jill King from the Moordown Historical Society who said they were happy to see the old station reopening and approved of the way it had been so sensitively renovated. 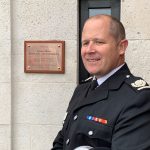 Dorset & Wiltshire Fire and Rescue’s Area Manager Craig Baker who has family connections to the old station and to heroic fire fighter Collingbourne unveiled a plaque in his memory.

Whilst the ground floor of the Fire Station has been converted into commercial premises, the flats above, arranged over three floors boast a unique and quirky specification, including innovative lighting and fittings to convey the station’s former glory. 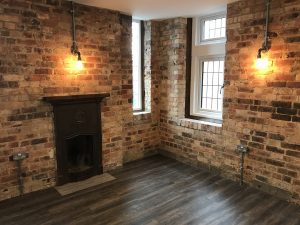 The original fireplaces, in their original positions have been given a facelift, the lighting gives off a warm hue with their wonderful olde worlde bulbs. Some of the interior walls retain the original brickwork and even the radiators have a historical flavour with Fire Hydrant-like taps.

Developers Westbourne Holdings were responsible for the conversion and are also redeveloping other local historical sites including the old Yates Wine Bar in Poole High Street. 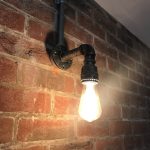 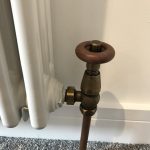 Radiator taps lend a nod to the former fire station

Owner of Westbourne Holdings, Graham Golder said: “I saw the old fire station building nearly every day as I drove past, and often thought it was a shame to see it the way it was – tired and neglected. When I saw it up for sale, I was really interested in seeing it regain some of it’s former glory, so I bought it!

“To be honest, the main factor for me with this project wasn’t about maximising profit, it was about creating living space that had respect for its history and letting its occupants feel a part of that history. I personally spent a lot of time and effort finding the right specification to really enable that”

The flats start at £110,000 for the studio through to £190,000 for the only two bedroom apartment in the block. More details are available from selling agents Christopher Shaw