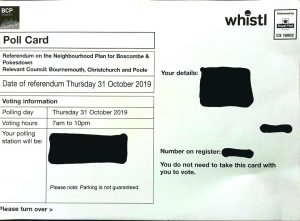 The referendum, due to be held on 31 October, is asking for residents to vote for or against the Local Neighbourhood Plan for Boscombe and Pokesdown but it appears that many residents are unaware of the plan prompting them to take to social media in confusion.

“My mother-in-law has just received a polling card through the post for the ‘Referendum on the Neighborhood Plan for Boscombe & Pokesdown’ – none of us have heard of this” said Jonathan Bond asking for information, which then prompted a similar response from others also had no idea what the polling card was all about. 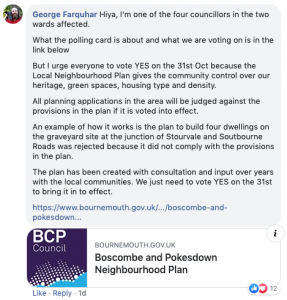 Local Councillor George Farquhar commented on social media that it was an important referendum and urged people to vote ‘yes’ to the plans which he said had been four years in the making.

Although he was keen to urge people to vote ‘Yes’  given the hard work that had gone into creating the plan, many were left wondering what they were being asked to vote ‘Yes’ to.

Despite claims that there has been plenty of publicity regarding the consultation, many residents appear to be in the dark and neither the Neighbourhood Plan or the forthcoming referendum are mentioned in the Council’s own magazine BCP News which hit local doormats mid-September.

Some local residents claimed to have seen information posted on facebook and other social media channels. But others pointed out, unless information is readily available offline, many elderly people will not get to see it. They’ll then be asked to vote on something they know little or nothing about.

BH Living managed to find information on the plan on the Council’s website but it wasn’t easy to track down: https://www.bournemouth.gov.uk/planningbuilding/PlanningPolicy/Other-Planning-Documents/boscombe-and-pokesdown-neighbourhood-plan.aspx Much of this article appears though to relate more to the council’s procedures and application for the referendum itself. Accessing the information from BCP’s website did appear to be tricky even for our web savvy team.

We found this website with lots of useful information on the plan: http://www.boscombepokesdown.org.uk.which one helpful resident on the popular ‘SOBO’ Southbourne residents facebook site was directing people to