A Dorset school’s letter to parents outlines the ways it will prepare for a no deal Brexit on 31st October.

The headteacher of Mountjoy School in Beaminster Jackie Shanks sent the letter out earlier this week which has caused some criticism for scaremongering parents.

The letter outlined the preparations the school were undertaking as well as advice to parents. This includes the school purchasing an additional freezer to store food and stock up on canned and long life products because of the risk of food shortages and encouraging staff to share transport and keep a school vehicle fully fuelled due to the risk of fuel shortages. The letter also advised parents to contact their child’s GP for any medication in case of shortages. 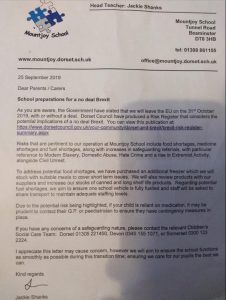 The letter sent out by Jackie Shanks, headteacher of Mountjoy School

Mountjoy School is a school for special needs children aged between two and 19 with some children reliant on medication. The headteacher wanted to ensure that these children had the correct amount of medication ready in case of a shortage.

The letter advises parents that the school is using funds to purchase another freezer to stock pile foods in the event of a food shortage after Brexit. It also warns parents to ensure they have enough medication for children and to contact GPs to ensure prescriptions can be written in advance. It was written in response to the Dorset Council’s Risk Register that created a list of implications if the UK was to leave the EU on the 31st October 2019 without a deal. This can be found on the Dorset Council’s website.

The letter also comes after the government publishing Operation Yellowhammer which is an assessment of the possible side effects of a no deal Brexit. This outlines risks such as food shortages, healthcare shortages and travel implications. The government has said there will not be an overall shortage of food just a lack of availability of certain items on the shelves and the Department of Health and Social Care are developing a multi-layered approach to dealing with the risk of the lack of medicines. To find out more about Operation Yellowhammer read the governments publication.

The letter was posted on social media and received backlash which claimed that the letter was scaremongering parents.