The smallest museum in Dorset has just doubled in size!  On Friday 27 September, the Mayor of Christchurch, Lesley Dedman, together with some fellow town councillors, formerly opened the newly extended Cinema Museum situated in the projection box, situated high up on top of the roof of the Regent Centre theatre and cinema. 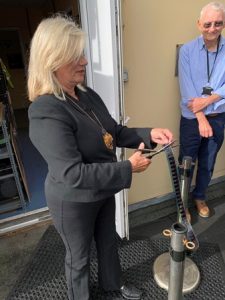 Led by the Regent’s Chairman, Gary Trinder, the Cinema Museum has been expanded to include the office attached to the back of the projection box, so the Museum now consists of two rooms.

This expansion has allowed for many more historic cinema artefacts to be displayed, including the Regent’s Automaticket machine which for a long time, cinema goers at the Regent will recall, was originally based in the Centre’s Foyer Box Office where it mechanically issued tiny, coloured paper tickets.  The colour coding signified Adult, Child and Concessions tickets and whether the seats were in the stalls or circle.

There are also new displays dedicated to other historic cinemas of yesteryear that were dotted across the BCP Council conurbation, most of which are now lost to redevelopment but have never been forgotten.

The Cinema Museum’s existing collection of vintage 35mm celluloid projectors, lenses and sound equipment remains in place in the projection box right next the Regent’s state of the art digital projector. 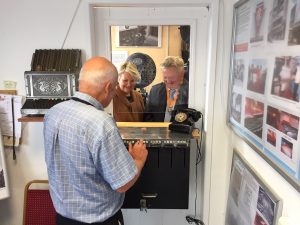 There are regular Cinema Museum Tours at the Regent which allow an unrivalled insight into the golden era of the silver screen and the equipment that made this ever-popular entertainment medium.

The next Cinema Museum Tour is on Monday 4 November 10.15am.  This behind-the-scenes tour will include a live demonstration of one of the vintage 35mm projectors in action and the guidance of the dedicated group of volunteers who maintain the Museum.  (Please note the Tour does include several flights of stairs up to the projection box and numbers are strictly limited, so early booking is advised)