Last night (Thursday 26 September 2019) saw the opening night of Gilbert and Sullivan’s ‘The Gondoliers’ performed by the popular local Christchurch Gilbert & Sullivan Society and staged at The Regent Centre, Christchurch

Originally performed in London in 1889, The Gondoliers is described as a ‘Savoy Opera’. Although there are moments of light-hearted comedy within the performance, perhaps this production is better described as more of a ‘musical/opera’, possibly offering more appeal to a wider audience.

This was the opening night and it was good to see it enjoyed a well-attended audience who all seemed to enjoy the 2.5 hour spectacle of jollity, song and dance with the added benefit of a live orchestra. 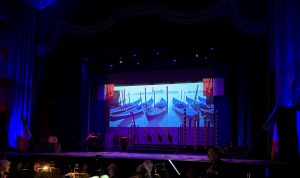 As I took my seat, I was greeted with a simple yet effective set with a back-drop of a Venetian canal pontoon and tables set up in the square. In some shows you never get to see the orchestra but due to the limited space at the Regent Centre this was an added benefit which helped make them very much part of the production.

After a few opening scores we are soon witnessing a wedding, two weddings in fact, as two very popular Gondoliers have to choose their brides to be. This in itself turns out to be a difficult choice as so many of the potential brides want to be chosen, so in the end our popular pair are blindfolded to make their choices.

Unbeknown to them we are also introduced to Casilda, the intended bride of the future King and heir to the throne of the fictional kingdom of ‘Barataria’.

As an infant she was betrothed to the future King but due to a mix up, no one knows who the King is. It is believed he could be one of the two Gondoliers. To help sort out the confusion temporarily, they both agree to jointly become King, while we await the arrival of ‘nurse of the prince’ who will hopefully help sort out the mix up.

To make matters even more complicated, our bride-to-be is secretly in love with another unexpected man. She is also not too happy when she discovers that one of the Gondoliers whom her parents have destined her to marry are now themselves married. We have to wait until the end to see how this all turns out.

A lot of work has clearly gone into this production and this you can see in the eyes of the whole cast who are clearly enjoying themselves.

The costumes add a delightful dimension of colour which helped to transport the audience from the drab and dreary early autumn weather outside into a bright and colourful world of music and dance.