The multi-award winning Buddy- The Buddy Holly Story returns to The Lighthouse Poole on is Landmark 30th Anniversary Tour.

Buddy- The Buddy Holly Story had its first debut in the west end in 1989 and has been thrilling audiences all over the world ever since.

‘Experience the drama, passion and excitement as a cast of phenomenally talented actors and musicians tell Buddy Holly’s story, from his meteoric rise to fame, to his final legendary performance at The Surf Ballroom in Clear Lake, Iowa.’ 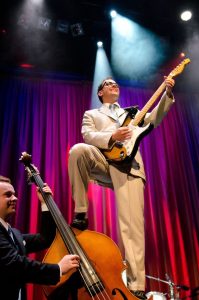 The production will bring with it a multi-talented group of actor-instrumentalists who will present a sensational two hours of live musical theatre. For Josh Haberfield, who plays Crickets drummer Jerry Allison, it’s almost a home town show. He grew up in Sopley and cut his theatrical teeth in local amateur dramatic companies.

Writer and producer Alan Janes says: “We can’t wait to get back on the road for this special 30th anniversary UK tour of Buddy with a new cast of hugely talented actors and musicians, who will be aiming to give audiences an unforgettable night at the theatre.”

The show will be at The Lighthouse Centre for Arts, Poole between Tuesday 29 October – Saturday 2 November.

For more information and to book your tickets, visit the website here.