Two skilled drivers from Yellow Buses will be battling it out for the top spot at the Bus Driver of the Year contest this weekend.

Marks Nobrega and Stuart White came first and second respectively in the local heats of the competition, held at the Yellows’ depot in Yeomans Way, Bournemouth earlier this year.

Both bus drivers will be carrying the hopes of their company as they compete in Blackpool on Saturday 31st August and Sunday 1st September for the finals.

The contest is regarded as the premier skills competition in the bus industry, and its roots can be traced back to 1967. 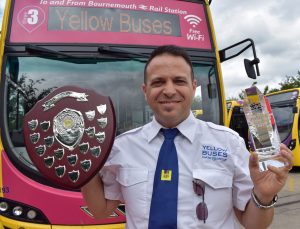 Blackpool bound: Yellow Buses driver to compete in the national finals of the Bus Driver of the Year contest with colleague Stuart White.

Up to 100 drivers from operators all over the UK will have to complete theory and driving tests which have been designed to challenge even the most skilful drivers.

They will take on a three mile course, which incorporates manoeuvring exercises, a circuit, and stopping at various bus stops where they are assessed for signalling, positioning and other elements.

“The hopes of the company now rest on their shoulders as they compete at the very highest level in the national contest. We wish them every success.”

To find out more about Yellow Buses, click here.