Crime is rife across the county with serial killers on the loose and threatening our innocent, sleepy towns … at least, according to Bournemouth’s Daniel Cole in his recent thriller Endgame.

His twisted tales of grisly death and mystery are set to kick up a storm with the release of his newest book in the popular series, that began with international bestseller Ragdoll. 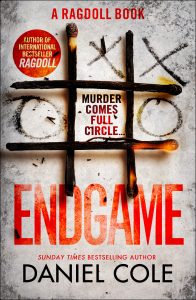 …When retired police officer Finlay Shaw is found dead in a locked room, everyone thinks it’s suicide. But disgraced detective William ‘Wolf’ Fawkes isn’t so sure.

Together with his former partner Detective Emily Baxter and private investigator Alex Edmunds, Wolf’s team begin to dig into Shaw’s early days on the beat. Was Shaw as innocent as he seemed? Or is there more to his past than he let on?

But not everyone wants Wolf back. As his investigation draws him ever deeper into police corruption, it will not only be his career on the line, but the lives of those he holds closest as well…

End Game is certainly set to be a fan favourite as the loved trilogy comes to a close this Autumn.

Taking it back to where it all started, Daniel explained: “For wanting to write in the crime genre, I really blame my best friend. We went to go see every horror movie going in Bournemouth at the cinema. That really got me into it!” 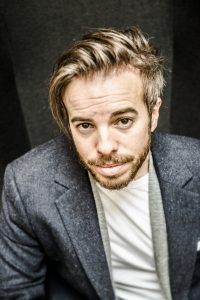 He went on to tell that: “Originally, I wanted to write for TV and film, that was always my passion. So, I spent six years writing screenplays and trying to get them out there but I never had any luck. They would always say to me ‘You’ve got potential but no, for now.’

“It was like they were dangling a carrot in front of me and I really was on the verge of giving up all together.

“Instead though, I made the screenplay for what was Ragdoll into a book and it actually got picked up straight away. Then ironically the T.V. rights for Ragdoll were sold before the book. Frustrating (where were they six years ago?!), but nothing but good news.”

The television rights were snapped up by the company behind the highly successful Killing Eve, which received critical acclaim for both the first and second seasons; a fitting match as Daniel’s novels share many of the same vibes, described by himself as ‘that dark humour mixed with gruesome crime’.

This new book, the third of the trilogy that has already seen success for Ragdoll and Hangman, will mean the most to those who’ve followed it from the beginning, though Daniel adds it can be a stand-alone read too.

“Funnily enough my editor finds me hard to work with!” he went on to say, “I’m such a perfectionist but that makes me proud of the books; I put everything into them and I think my readers can really understand and appreciate that.”

Quite the well-rounded author, Daniel has worked as a paramedic, an RSPCA officer and most recently for the RNLI, with many reporting that he is ‘driven by an intrinsic need to save people or perhaps just a guilty conscience about the number of characters he kills off in his writing.’

He said: “With my experience as a paramedic the medical knowledge is useful, I suppose, in killing off a few people in the book!

“I loved being a paramedic and only gave it up because of a girl and that didn’t work out anyway. Some days it was the best job in the world and some days not, but I’d definitely say that’s where the sarcastic and wry, dark humour came from; lots of people use it in that environment as a coping mechanism.”

“Some people really like to get into the gritty, accurate writing details but I’m not as method as that, so aside from the medical things that I know, I prefer to give my stories that hyper-real and over-the-top flair to them. And hey it gets me out of doing too much research!”

With the new book’s launch fast approaching, Daniel explained how he was excited for the publicity he gets to do. He said: “We’re keeping it really local which is so nice for me. I don’t have to go all the way to London or anything, instead I’ll be joining Bournemouth Bookclub as well as picking the music on Radio Solent to help promote the book.”

Daniel is also scheduled to appear at local bookshop BH6 Books in Southbourne, to meet people and sign copies from 5pm-7pm on Thursday the 5th of September for the exciting launch. Click here to find out more.

Pre-orders for the book can be purchased from here.