All the wonder, mystery and magic of Disney is headed to the New Forest next month as the music of childhood’s best is brought to life.

Professional symphony orchestra Questa Musica are returning to New Milton on the 14th of September this year with the music from Disney’s Fantasia and Fantasia 2000.

Featuring all the family’s favourites from the music of this timeless Disney classic, including The Sorcerer’s Apprentice, Night on a Bare Mountain, Toccata and Fugue in D minor, Nutcracker, Pines of Rome, Rite of Spring, Dance of the Hours and The Firebird, the concert is set to be the biggest in the New Forest this year.

Through this concert, which is taking place at the New Milton Memorial Centre, Questa are looking to raise funds for The Isabel Baker Foundation, a charity based in Christchurch, who provide support to bereaved parents of children with cancer who experience financial difficulty in the months following their child’s death, as well as providing food vouchers to oncology parents and parents who have prolonged stays in hospital with their child during treatment.

Questa representative Alex Hustler said: “The audiences in the New Forest always give us such a warm welcome and take part in our concerts in such an enthusiastic manner, so we’re delighted to be coming back.

“Having brought an eight-foot dinosaur to conduct Jurassic Park a year ago, who knows what this concert might bring?! If people get in touch and tell us what they’d like our conductor to wear this time (do remember the outfits in the original film), we’ll see what we can do! We can’t promise a dancing hippo, but you never know…’ 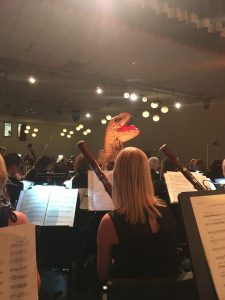 “Having brought an eight-foot dinosaur to conduct Jurassic Park a year ago, who knows what this concert might bring?!”

Questa Musica perform twice a year in New Milton as part of their outreach programme to take music to places where full orchestras wouldn’t normally be able to go, as well as to raise funds for local charities. Their members include professionals from orchestras including the London Symphony, Royal Philharmonic, Bournemouth Symphony, Hallé and others, alongside the best local professionals and semi-professionals. They have performed works from Mozart to Freddie Mercury and Queen and they have raised hundreds of thousands of pounds for charities throughout Dorset and Hampshire over the last decade.

The next Questa concert after this will be at The O2 Academy in Bournemouth on the 13th of December, where they will be joined by the First Lady of the West End to perform Questa Sings Christmas with Kerry Ellis.

More information and tickets for all concerts are available here