Wake Up Maggie (or any other Rod Stewart fans) because a brand-new show is coming to town; Some Guys Have All The Luck: The Rod Stewart Story is at Lighthouse, Poole.

Friday the 4th of October will see a fantastic live concert celebration of one of rock music’s greatest icons.

Frontman Paul Metcalfe’s performance as Rod has been described as incredible and even prompted the superstar’s brother Don Stewart to say: “I’ve seen some ‘Rods’ in my time, but Paul is the best one I’ve ever seen.”

The show debuts fifty years since the release of the timeless artist’s first album.

Rod’s sister Mary also approved, adding: “Paul’s voice and mannerisms were the closest I’ve ever seen to Rod himself.” 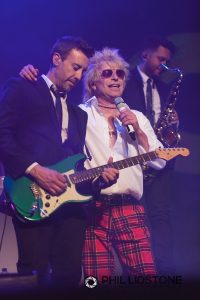 The first half of the show features hits from his earlier career such as ‘Handbags & Gladrags’ and ‘You Wear It Well’ along with Faces favourites like ‘Stay With Me’ and ‘Twistin’ The Night Away’, all interwoven with some interesting and amusing anecdotes.

The second half is described as one big party and includes all Rod’s big hits such as ‘Maggie May’, ‘Baby Jane’, ‘Do Ya Think I’m Sexy’, ‘Sailing’, ‘Tonight’s The Night’, ‘You’re In My Heart’ and, of course, the title song, ‘Some Guys Have All the Luck’.

Some Guys Have All the Luck hopes to capture all the excitement, energy and charisma of this legendary performer, including the infamous moves, showmanship and sense of fun that have made Rod Stewart one of the most successful artists of all time.

For more information on the show times and how to get tickets click here.