No spoilers in this review:

Do you ever wonder who that person really is that you are sitting with, possibly in the lounge on that cold night as the fire crackles and dances, its flames full of mystique? Is this person the love of your life, the person you just dream of spending your life with? Or is this person a psychotic murderer playing you to their evil ends? It is here I introduce you to one of Agatha Christies lesser known physiological thrillers, Love From A Stranger. 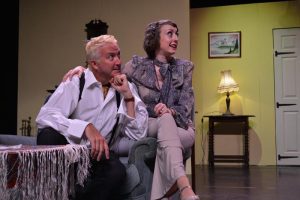 Scene from Dramatic Productions Love From A Stranger

Back in 1934 the queen of crime, Agatha Christie, published a short story novel called “Philomel Cottage”, two years later in 1936 she re-wrote the play for the stage, later that same year the ‘actor-playwright’ Frank Vosper* adapted it further into what we know it today as “Love From A Stranger”, giving himself what was some described as a ‘juicy role’ both in London and on Broadway productioCecily Harrington is a rich lady, a very rich lady after winning a large amount of money in a sweepstake, yearning for fun and a life of adventure she meets up with a complete stranger, Bruce Lovell.

Almost over lunch Cecily then abandons her finance, her friends, her job, indeed her whole existence, spell bound by the handsome Bruce, she gives it all up for the idyllic life in a country cottage, she now has everything she could ever want.

Last night (9 August 2019) this play was performed to a local audience in the beautiful art-deco Tivoli Theatre Wimborne with an adaptation by the Poole based theatre group “Dramatic Productions Ltd”, exquisitely performed it contained all the twists and turns luring you to the dramatic finale. 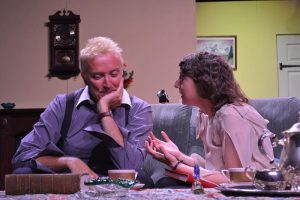 Scene from Dramatic Productions Love From A Stranger

The period setting is perfect with the furniture and clothing of the time. Even the time before the show started and again during the interval music of the period was played loudspeaker systems, they have thought about everything for this production.

This was the first time I had seen this play but it is one I would say if you enjoy your Agatha Christie then this is play you will want to see. The production is currently on at the Tivoli Wimborne and closes today, Saturday 10 August but does have both a matinee and an evening performance. For tickets call 01202 885566 or visit their website here

*Frank Vosper, playwright 1899 – 1937, himself died in mysterious circumstances. Travelling back to England aboard the SS Paris he disappeared overnight, after considerable media speculation it was recorded that he fell from the liner mid-Atlantic with a verdict recorded of ‘death by accident’