Lighthouse Poole will showcase a range of images from printer and painter, John Sargeaunt over the last ten years in a new exhibition.

The exhibition will open on Tuesday 3rd September at 10am in the Mezzanine Gallery, and will run until Saturday 28th September. 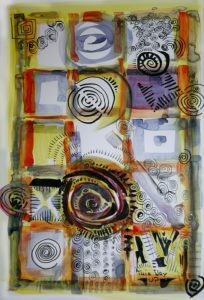 John has been inspired by the fragmented visual signs and messages transmitted to us as we move inside cities. Road signs, windows, and tower blocks are just a few of the sights that have led John to new imagery using an increasingly abstract and collage format.

John said: “I started drawing and painting at an early age encouraged by my grandmother who was a painter of horse portraits at the end of the 19th century in Ireland.

“In the 1960s, when training to be a teacher, I chose Art as my main subject and was really stimulated by my tutors, print maker Anthony Dyson and painter Charles Howard.

“I continued to develop my printing and painting whilst teaching during the 1970s and my absorption with silkscreen printing dates from this period when I created abstract designs based on surface and texture.”

At Southampton Art College, John learned etching and lithography. Then in 1978 held a one man show at Southampton University Gallery where he showed prints, paintings and painted reliefs.

He continued, “For the remainder of the 20th century I was passionately involved with sail boat racing and running my own business in the boating industry, both of which left little time for either painting or printing.

“However, in the 1990s I felt the need to pick up the creative threads again and, although travelling extensively for work, after seven years of study I obtained an Honours degree with the Open University.”

Summer in the City

Then in 2002, John started printing at The Arts Institute, Bournemouth. Here, he was encouraged to return to image making with etching and collograph prints. This was also the time that he joined Poole Printmakers, which was influential on his regenerated creative output.

Since 2013, John has held several solo exhibitions in the Wessex area at Forest Arts, New Milton; the Red House in Christchurch and at Southampton City Gallery.

For tickets and more information, visit www.lighthousepoole.co.uk or call 01202 280000