All of the lanes immediately around the new signalised junction in Poole are now fully open to motorists.

The nine-month long improvement works were funded by the Dorset Growth Deal and marks the completion of the second phase of the wider Townside scheme, which is also on time and below budget.

This initiative will boost Poole’s economic growth and bring an anticipated £500 million of leveraged private investment in to the area. Furthermore, up to 1,500 new jobs and 3,000 new homes will be created.

Jim Stewart, Chair of Dorset LEP said: “We are delighted with the progress being made on the major infrastructure improvements at the Port of Poole which are future-proofing key transport routes and bringing new jobs and £500 million of private investment into the area.

“The fact that the works at Hunger Hill have been completed so efficiently, on time and well within budget, means that the financial savings can be used to benefit even more projects that will further drive economic growth across the BCP Council area.”

Minister for Local Growth, Jake Berry MP, said: “The Port of Poole is such an important business centre for Dorset and we are supporting it to thrive with over £23 million of growth deal funding.

“This major investment in transport networks, news homes and businesses is already delivering significant benefits for the local community and helping to drive economic across the region.”

The first phase of the Townside project was completed almost one year ago and focused on the junctions either end of Marston Road. This was in readiness for the second phase where Hunger Hill roundabout was reconfigured to become a junction in January 2019.

The final phase of the scheme began last year and involves the completion of the links for pedestrians, cyclists and other road users from Hunger Hill to Poole Bridge.

At the moment, work is taking place on the middle section of West Street and between New Orchard and Bay Hog Lane. These improvements include kerbing, gulley works and resurfacing.

The works will cause some delays, especially during peak hours, but are set to be complete before the school summer holidays. Further works will start on West Street once the schools reopen in September 2019 and will continue throughout next year

The final phase of the Townside scheme includes developments to public spaces in this area of Poole to enhance the quality of life for residents and visitors to the area.

These works will have minimal impact on motorists and temporary footpaths and cycle ways have been provided around the site.

Additionally, two artists have been commissioned to design and create attractive public spaces in the Townside area.

Michael Condron will be providing two major ‘gateway’ artworks, creating a sense of arrival and departure at the southern and northern tips of area.

Designers Dallas-Pierce-Quintero, have also been appointed to create high quality and contemporary designs as well as stylish street furniture.

The new visual improvements are based on feedback received from residents during the previous public consultation and should be installed by the end of 2020.

Julian McLaughlin, Director of Growth and Infrastructure, BCP Council, said that the scheme was originally anticipated to cost £11.7 million. However, with careful contract management and efficient methods, the Hunger Hill major works have cost less than originally budget for.

As a result, a £1.5 million saving has been made on the project overall. This money is being reinvested by DLEP in to other projects across Bournemouth, Christchurch and Poole.

Cllr Andy Hadley, Cabinet Member for Transport and Infrastructure, BCP Council, added: “As well as Townside, the schemes also include the major refurbishment works to the Poole Bridge approach spans to ensure that Poole continues to benefit from two bridge crossings and improvements to the A349 Gravel Hill.” 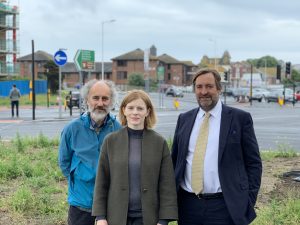