Homeowners across the Bournemouth, Christchurch & Poole conurbation are reporting rat sightings in toilets, and the problem appears to be on the increase according to local pest control expert Paul Storey.

Paul, a former Marine, works as The Pest Detective and has reported a number of recent call-outs from hysterical residents asking him to deal with ‘a rat in their toilet’.

He said: “I have had a number of calls recently across Dorset, and some in Hampshire from people with rats in their toilets, and as you’d imagine they are terrified.

“When I joined this industry 13 years ago, I didn’t know that trying to calm people down would be such an important part of the job.

“But when you look into your toilet and see a rat it’s really scary for the customer and they can get quite hysterical.

“I have been to four cases where rats have definitely emerged into the toilet and several others in which the owner has heard them in the pipes.”

The most common type of rat that you will see in your toilet is the Brown Rat, the near 2ft long rat will swim up into your toilet block before moving through the pipes and getting stuck in the bowl. 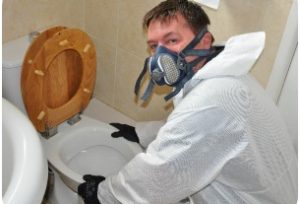 Watch this to see how they do it.

How do you stop them coming up the toilet?

The best solution to stop rats entering your toilet is a drain guard, which allows things down the pipes but not up them. 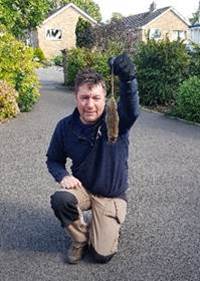 What Paul has found is that there are not necessarily more rats than before but rather that rats are now more likely to climb up the toilet.

BCP’s Environmental Health unit say they are unaware of any increase in rat numbers.

Should you be worried?

The short answer is no, the old adage “you’re never more than six feet away from a rat” isn’t strictly correct.

Dr Dave Cowan, Leader of the Wildlife Programme at The Food and Environment Research Agency in a recent interview with the BBC, said that less than 1% of residential buildings have rats in them, so the odds of you finding a rat in your toilet are relatively low.

However, you should still maintain good food hygiene habits so as not to attracts rats near your house.

If you’re unsure how to improve your food hygiene habits follow these simple tips:

Follow these tips and there is no reason why you should attract any undue attention to your house.