Bicycle sharing service, Beryl, has shown off their service to the press ahead of the public launch in Bournemouth and Poole on 17 June.

There will initially be 50 distinctive green bicycles in 120 bays across the two towns of Bournemouth and Poole, the scheme will ramp up to 1,000 bikes over the summer. The majority of the bays are situated near the coast and town centres, with none further north than the university. Christchurch is not available at launch but discussions are taking place regarding an expansion into the town in the near future. More bays are scheduled to be painted this summer, expanding the scheme to the north of the conurbation.

There is no cost to the tax payer as the Council did not pay for the contract and Beryl is responsible for upkeep of the bikes. Beryl make money through users paying to use the bikes – if you want to use the bike on pay as you go there is a £1 unlocking fee and a 5p per minute charge. Other options include minute bundles, for every 100 minutes up to 400, and an unlimited 24-hour bundle for £12. If you take the bike outside of the geo-fence and do not bring it back you will be charged. 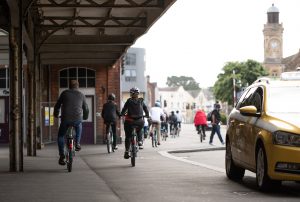 Having tried out a bike at the press launch, they offer an agile and quick ride, albeit a slightly firm one. The height of the seat is fully adjustable and there are three gears. There is a platform at the front for strapping on a piece of luggage weighing up to 10kg; front and rear lights frame the bike. A lock on the rear wheel is the primary security feature; and each bike’s location is tracked.

To take one out you simply pay £1 via the app and then touch your smartphone on the front, causing the rear lock to open. The app and all its features are easy to use; however there are no plans for a card as of yet meaning you must have a smartphone to use the service.

Suggestions for parking bays were made by the Council, critical points like the train station, Bournemouth University, the sea front and the two town centres are included. The routes that users take will be tracked to see where is most popular; BCP Council will then use this data to coordinate their infrastructure improvement strategy.

Nick Phillips, Accessibility Team Lead at BCP Council, outlined how it all works: “We are shortlisted for the £2.5bn Transforming Cities Fund which is designed to get people out of their cars and travelling sustainably. BCP Council is already mapping the entire main strategic cycle network, following that we are identifying how to get segregated cycle ways, because that is what people love, segregation away from the traffic. Hopefully we will be successful with the funding and then you will see those routes upgraded over a three-year period.”

BCP Council is aiming to encourage people to use the bike share system for at least one day a week, in the hope that reducing congestion will free up some of the country’s most packed roads.

Beryl has an extensive history working alongside other bike share providers around the world, in cities like New York and London – including the famous Boris Bikes.

This experience says Philip Ellis, Beryl’s CEO, will help them deliver a quality service: “We improved the technology that we were offering to other bike share systems to the point where we saw lots of opportunity in places such as Bournemouth and Poole to use our technology and experience in order to bring our own bike share system to the city.” 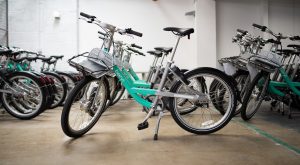 Philip also believes that the five year contract will provide both parties with the flexibility to improve the service further: “The local authority has a really good vision for how they want to improve cycling in the conurbation over the course of the next four or five years. We think that introducing a bike share scheme now as they go on that journey will help us embed a system into the city. Together we can encourage people to cycle more often.”

It is this spirit to get people out of motorised transport and onto bikes that have empowered bike share schemes around the world and with Bournemouth and Poole boasting miles of beach and plans to improve cycling infrastructure now might be the time to ditch your car and cycle instead.

If you love the idea of cycling to work but don’t feel confident on the bike and you would like a few lessons, you could sign up for one-on-one Bikeability lessons.