With the Euro Elections looming this Thursday, the feedback we’re getting at BH Living is that many local people are undecided about which way to vote.

The forthcoming elections are destined to be the last that UK people will participate in after the UK voted to leave the European Union in the national referendum of 2016.

St Aldhelm’s church, Branksome was the venue for a cross-party pre-election debate attended by over 250 people who gathered to listen to and question candidates standing for election in the South West.

A buzzing atmosphere, with people from all sides of the argument, filled the church on a warm Tuesday evening (14 May), lead by the Vicar of St Aldhelm’s Church, Pip Martin, and chaired by Bournemouth Echo’s Andy Martin.

Lord Adonis was a replacement for Clare Moody (Labour) who was unable to attend due to personal reasons, and UKIP were absent completely, Lester Taylor was due to attend but the Rev. Pip Martin claimed he dropped out to save one of the other candidates from walking out.

It was asked of the audience at the start of the night to give applause for every candidate fairly, and to not cheer, boo or heckle which most seemed to be in agreement with, although the rules soon went by the wayside as the debate gathered pace. 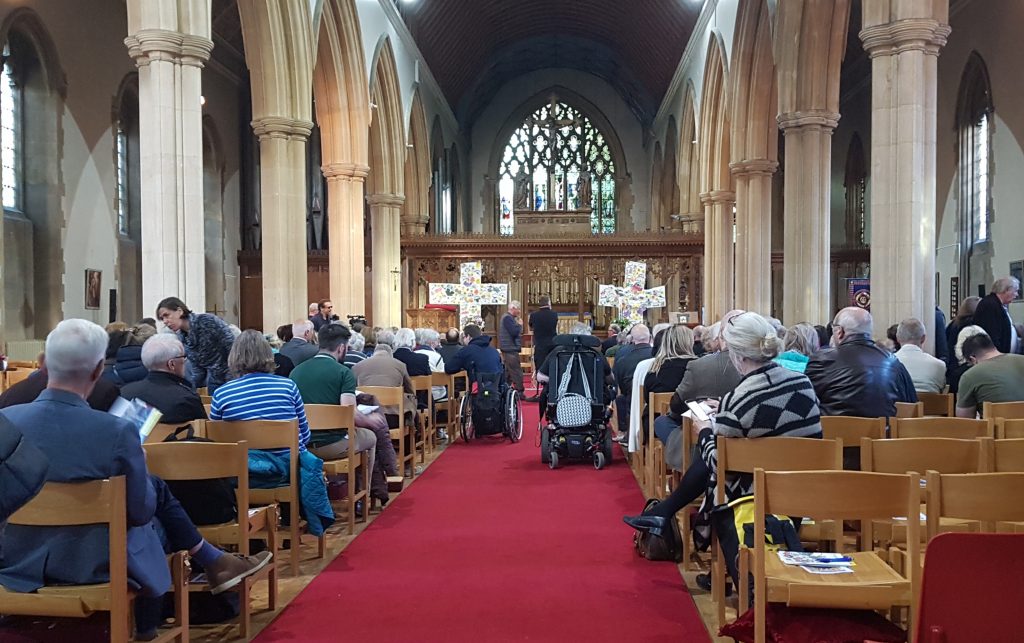 As the candidates gave their opening statements, it was clear what each one of them stood for.

Molly Scott Cato, already an existing MEP for the Green Party, and hoping to be re-elected, described herself as “an experienced remain voice” and although she was glad the conversation around climate has been transforming recently, she is keen to stay in the EU and continue work around this issue.

Labour’s overall stance on Brexit and the EU remains unclear, Lord Andrew Adonis said: “It’s been a disaster, everyone accepts it is a poor deal.” Although added: “I think Theresa May has tried her best.”  He also raised concerns about the Ireland border, bringing attention again to the Good Friday agreement.

Ann Widdecombe opened with the reasons why she has joined the newly formed Brexit Party. She stated: “The nation made a decision. I believe we should implement that decision.” Widdecombe also said she believed that negotiations were “a mess” and that there was a disconnect between the people and their parliament. But reiterated “I will focus on one thing; delivering what the people voted for.”

The Liberal Democrat’s Caroline Voaden also focused on her pro-remain ideals, describing a “Brexit stalemate in parliament” and asking the question “what kind of Europe, what kind of country do we want to be?”. Answering for herself, she expressed the desire for a “free, peaceful and democratic Europe” and ended by saying “Every vote for the Liberal Democrats is a vote to stop Brexit.”

Jim Godfrey, who defected from Labour to the new party Change UK, spoke of how politics is more “extreme” in recent times, but results from the recent local elections showed to him that “people are now choosing hope”. He added: “It was a mistake to trigger Article 50 without a plan” and expressed concerns of Brexit leaving Britain worse off in many ways.

Conservative Faye Purbrick described how she had enjoyed living and working abroad in her youth, but now wants to deliver Brexit for the people, telling us “we are our own country” and reminding us that “we’re leaving the EU not Europe”. She said she is ready to serve in the European Parliament for a short time until Brexit is delivered, but to keep relations amicable.

Neville Steed, the independent candidate on the panel, has no previous political experience, but believes “we should honour the referendum results” and wants to go to the EU as a representative of the people’s voice to get things done on our behalf.

As the questions came up from the chair and the audience, quizzing candidates on what they’d do if elected, including what we should focus on as a country, the rule of no cheering or booing then quickly fell apart. Audience members expressed their opinions more vocally, even heckling as the candidates gave their answers.

The noise came from both sides of the argument, pro-remain and pro-brexit, all were growing in volume as the night went on, with Lord Adonis, Ann Widdecombe, Caroline Voaden and Molly Scott Cato all receiving the largest reactions.

The candidates debated over whether to focus on Brexit first, or the smaller issues first, disagreeing on many points. Widdecombe stated “before we sort out anything else we need to deliver Brexit”. Faye Purbrick and Neville Steed agreed, although Molly Scott Cato directly opposed this opinion.

Lord Adonis stated loudly “we should end austerity” which received a large applause, and also suggested investing more in public services, and addressing climate change. Widdecombe also received large cheers after her statement that “the EU has no right to intervene in our affairs”, never letting up on her stance of promising to deliver Brexit.

Jim Godfrey and Neville Steed, although not sharing the same stance on Brexit, both said if elected they will represent the people’s voices in the European Parliament. Lord Adonis promised he would be “the exact opposite of Nigel Farage” to “connect Brussels with the people” and “bring jobs and industries to this region”.

As an existing MEP, Molly Scott Cato stated how she has started many things within the EU, but she wishes to continue in her role so that she can finish the job. She explained how they have been working on stopping tax avoidance and making farming more sustainable. She also called for a change in the way parliament works with more transparency needed in politics.

Molly Scott Cato and Ann Widdecombe clashed with opposing views from either side of the Brexit debate.

Molly said: “The people that shout the loudest are not winning. All these leave lies have unravelled, that’s why we have the right to choose again.”

Ann Widdecombe immediately responded: “Our campaign was not based on lies.” Which received loud reactions from both Remainers and Brexiteers in the audience and on the panel.

This prompted the Conservatives Faye Purbrick to state “This country doesn’t debate, it argues.”

Jim Godfrey, Caroline Voaden and Molly Scott Cato all agreed that as a country we need to be focusing on the climate crisis, saying that we have an opportunity to show leadership on this issue, and that the issue does not stop at national boarders.

Neville Steed believed we need to focus on the energy policies, and Lord Adonis chose homelessness as his top priority. But Ann Widdecombe pushed that “no government has just one priority” choosing between fixing the health service, and bringing more law and order to the streets as her top issues.

The candidates then debated over how peace would be maintained as we leave the EU, with no major wars between EU or NATO countries in the last 70 years. Ann Widdecombe and Faye Purbrick agreed that the EU is not the peacemaker, NATO is and Purbrick stated: “Leaving the EU will protect us from war” believing that bringing people together who do not want to be together will cause too much friction.

The others all agreed to the contrary; that EU were indeed peacekeepers. Jim Godfrey said: “we can be strong at home and strong in Europe”, Lord Adonis pushed the idea of “leading not leaving” and asked the people to not “imperil our security”. Molly Scott Cato added: “peace doesn’t happen by accident, you have to make peace.”

The night drew to a close with emotions running high. Whether the debate made things clearer for the audience is doubtful with many seeming to have arrived with an already unshakeable opinion but for those waverers of which there seem to be many in our local area, this debate may well have enabled them to understand what the different parties and candidates were actually standing for.

Polling starts at 7am this Thursday 24th May with the doors closing at 10pm but the European elections will be taking place across the EU between 24 and 27 May. Results from the UK are expected late on Sunday 26th May.