Bournemouth’s Whitewall Gallery is set to welcome outstanding figurative artist Fabian Perez to the UK as he celebrates the launch of his new collection of portraits and sculptures.

Multi award-winning Perez was one of the official artists to the London 2012 Summer Olympic Games. He will tour Clarendon Fine Art and Whitewall Galleries around the UK, stopping off in Bournemouth on April 11 at the exclusive Westover Road gallery.

Now Based in LA, but originally from Argentina, Perez has painted many of the world’s most famous faces including footballer Lionel Messi, Pope Francis, Rihanna, Sugar Ray Leonard and UK comedy genius John Bishop. He is one of the world’s most collected artists.

In describing his new art collection Intimos Momentos, he says: “A quiet conversation, a pause for reflection, a passionate embrace on the dance floor…these are the intimate moments that inspire my work, that offer a fleeting glimpse of another life.”

That ‘other life’ that Perez refers to has been well-documented over the years, and all the hours he spent in the underground bars and nightclubs of Buenos Aires in his youth, which had an immense impact on his oeuvre. 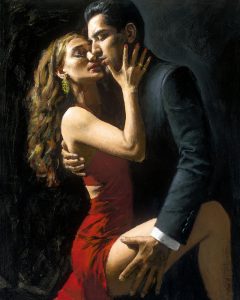 His work often represents experiences and memories from his youth, portraying an interesting cast of characters ranging from seductive and beautiful women to the enigmatic man in the dark suit based on his own father, who ran nightclubs, tango clubs and bordellos.

Says Clarendon and Whitewall CEO Helen Swaby: “This spellbinding new collection of limited editions from Fabian is characterized by a passionate, narrative style and an intoxicating atmosphere. The tempo and cadence of the human figure is brought to life as his figures dance an intimate tango, while in the lone studies, there is always a beautifully conveyed sense of latent energy. We are hugely excited to welcome Fabian back to the UK to showcase his fabulous portraits and sculptures.”