Westover Kia in Ferndown, part of the Westover Group, is encouraging football fans and players of all ages to visit the showroom on Wimborne Road East and donate their used and unwanted football boots to help support it in its bid to gather as many as possible for charity.

Kia Motors Europe is sponsoring the 2019 UEFA Europa league, and as part of its sponsorship has launched the UEFA Europa League Trophy Tour, driven by Kia, which aims to collect football boots for charity while giving fans across Europe the opportunity to see the iconic UEFA Europa League trophy. The motor manufacturer has selected dealerships in each participating country to act as boot collection points and Westover Kia has been chosen as one of the UK dealerships.

From now until April 29, ahead of the UEFA Europa League final in Azerbaijan, Westover Kia will be collecting boots which will then be given to the UEFA Foundation for Children and taken to the Zaatari refugee camp in Jordan for Syrian refugees of all ages.

Those who donate a pair of boots will also have the chance to win tickets to the UEFA Europa League final, among other prizes. 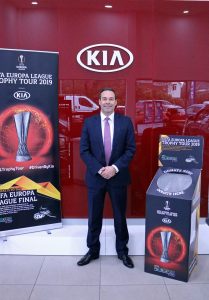 Gary Clark, brand director for Westover Kia, says: “It is a privilege for Westover Kia to be selected by the brand to be a boot collection point. We’re hoping that many people across Dorset and surrounding counties will visit the showroom with their old boots and donate to this worthy cause. With these donations we will be able to make a positive contribution to the lives of young refugees who have a passion for football.”

He adds: “For those wanting to catch a glimpse of the UEFA Europa League trophy, Kia Motors Europe will be visiting London, Geneva, Seville, Berlin, Milan, Moscow, Paris and Baku with the prestigious cup and fans should keep an eye out for locations which will be announced by Kia Motors Europe.”